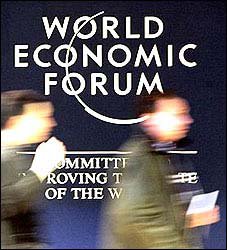 Listened to a lot of people lately with Davos 2006. My
guess is if there is no proper understanding of how the
meaning of politics, trade, sciences, security and
diplomacy is changing within Asian and African nations
set for the propagation of freedom, we are destined to
once again experience a collision between 19th century
conventional diplomacy and the 21st century new
diplomacy of the European and United States powers.
Bristling with perplexities, actors of the two thorny
questions of states' rights are to be revealed with
China and Asia power triangle versus the other world.
Mind the gap! Not to repeat the mistakes of EU and US
monoliths.

I ) The China brain-teaser

- Can China implement internal reforms to further its
development?

- How will China's relationship with the rest of the
world affect its development and shape the global
context?

"Panellists briefed participants on the World Economic
Forum's "China and the World: Scenarios to 2025"
project, a year-old initiative to develop deeper insight
into China's development by analysing scenarios for the
future of the country. Ged Davis, Managing Director,
World Economic Forum, explained that three scenarios
were constructed after consultations with about 150
individuals including businesspeople, academics and
other experts around the world in workshops in Paris,
Beijing, London, Shanghai, Singapore and Washington DC.

The scenarios are as follows:

Regional Ties: In this case, faced with a global
environment marked by growing protectionism, China
increasingly turns to its Asian neighbours for trade and
investment and for support of its reforms and economic
development. Jean-Pierre Lehmann, Professor of
International Political Economy, International Institute
for Management Development (IMD), Switzerland, said that
this scenario is highly "credible" because key
conditions such as the rise of protectionism are
actually playing out. Lacklustre results from the
recent World Trade Organization (WTO) Ministerial
Conference in Hong Kong show that global integration is
stalled and "the multilateral system is eroding",
Lehmann argued. In addition, he added, in response to
China's emergence, "the trend is to emphasize the
threat, not the opportunity."

Unfulfilled Promise: China's struggle to implement tough
reforms leads to economic, social and ecological
disruptions. Global economic integration, while
proceeding, is hampered by security concerns. Linda
Yueh, Fellow in Economics, London School of Economics
and Political Science, United Kingdom, explained that
this negative scenario would arise because of a lack of
institutional reforms. The hope is that, considering
the consequences suggested by this scenario, China would
move forward with the reforms necessary to produce a
more positive outcome.

New Silk Road: China is well on its way to achieving
balanced development, driven by strong and inclusive
global growth, accompanied by deepening economic
integration and increased trade. Financial, legal and
administrative reforms in China lead to the emergence of
a middle class and a modern market system. Wang
Jianmao, Professor of Economics, Academic Director, MBA
Programme, and Director, Case Development Centre, China
Europe International Business School (CEIBS), People's
Republic of China, said that the new five-year-plan that
is to be approved in March will set the conditions for
this scenario to play out. The plan stresses such goals
as "harmony, sustainability and balance". Reform, Wang
said, "will be more proactive, comprehensive and not
piecemeal." 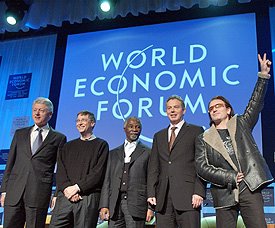 Analysing these scenarios "allows you to reflect on the
ways to prevent them", said Lehmann. Businesspeople
should "understand the likelihood of each scenario and
make contingency plans for each of them," advised Bai
Chong-En, Mansfield Freeman Chair Professor of Economics
and Chairman, Department of Economics, School of
Economics and Management, Tsinghua University, People's
Republic of China. Facilitator Robert Go, Global
Managing Director, Industry Practices, Deloitte, USA,
asked the panellists what one step they would recommend
to enhance the chances of achieving the most positive
scenario, the New Silk Road. Wang reckoned that much of
the onus is on the Chinese government and the quality of
its governance. Yueh identified innovation and
technological progress as essential ingredients to
promoting reform. A positive outcome depends not just
on what goes on in China, but also how the world
responds, Lehmann said. In China, the rule of law is
crucial; the rest of the world should welcome China's
emergence as an opportunity, not a threat.
In a show of hands, participants rated the Regional Ties
scenario as the most likely to play out." 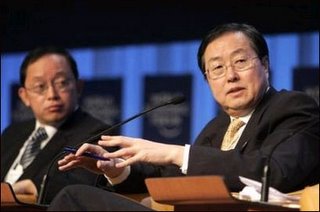 Picture of Governor of the People's Xhou Xiaochuan, right, gestures
while speaking during a plenary entitled 'China Goes
Global' at the World Economic Forum in Davos.


II ) Asia's Power Triangle, an economy for Asia that
"harmonizes economics and happiness"...?

Answers : "Participants challenged the premise that a
"power triangle" is evolving among China, India and
Japan. Kishore Mahbubani, Dean, Lee Kuan Yew School of
Public Policy, Singapore, argued that a "power
quadrangle" would be a more appropriate diagram ? the
US, "the most important actor in the region," must be in
the picture. The paramount relationship is between the
US and China, but it is unclear in which direction it is
heading, Mahbubani added. India, meanwhile, is being
courted "ferociously" by the US, though Delhi is just as
ferociously refusing to be used as a card.

Harry Harding, Director, Research and Analysis, Eurasia
Group, USA, proposed a schematic of three interlocking
triangles: the US-Japan-China, the US-China-India and an
emerging China-Russia-Japan dynamic focused on energy.
Discussing the two established triangles, Harding agreed
that the US-China relationship is the key. If US-China
ties are good, then both triangular connections should
be positive. But if US-China relations are bad, this
would likely result in aligning the US and Japan
together against China. India, on the other had, would
seek to play the pivotal position of balancing the US
and China. 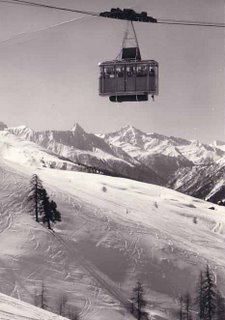 Japan's real intensions are always hard to discern,
Mahbubani reckoned. Its dispute with China in recent
months, triggered by visits by the Japanese Prime
Minister to a shrine to war dead, suggests that Tokyo
feels that its secure relationship with the US allows it
to take some risks in its relationship with Beijing, he
explained. Still, Japan has clearly deepened its
relationship with China significantly, Makio Miyagawa,
Director, Japan Institute of International Affairs
(JIIA), asserted. Japan is hedging this big bet by
strengthening its ties with South-East Asia, Kenneth G.
Lieberthal, Professor of Business Administration,
University of Michigan, USA, added. Tokyo is also
boosting its relations with India

According to Lieberthal, Asia has become an integrated
manufacturing platform, with China as the final assembly
point for products that are exported to the US and
Europe. Components for these goods are sourced from
across the region. Lieberthal pointed out that, while
India's trade with China is growing rapidly, though from
a very low base, India is focusing on deepening its
economic ties with ASEAN. Yet ASEAN has already gone to
China, which has a trade deficit with most of the
South-East Asian countries. Many ASEAN countries invest
much more in China than China invests in them. "There
is a system that has already gelled in Asia that India
is coming into but is not yet a part of," Lieberthal
observed. India's approach to East Asia suggests "there
is growing convergence in Asia," Miyagawa concluded.

It should be understood that modern diplomacy is not a
zero-sum game, Mahbubani maintained. China has been
purposefully sharing its prosperity with its neighbours,
proposing free trade arrangements. Yuan Ming, Director,
Institute of American Studies and Vice-Dean, School of
International Studies, Peking University, People's
Republic of China, agreed. She noted that, despite
recent sourness in their relationship, China and Japan
have continued to cooperate on major issues such as the
environment. 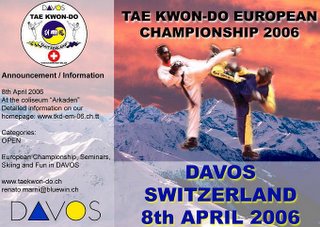 But does growing economic integration means that
conflict is becoming less and less possible? Harding
warned that some relations in Asia are "particularly
neuralgic". China and Japan share culture and values,
but also have a history of conflict and hostility. The
need for energy security could also cause severe strains
between India and China and between Japan and China. 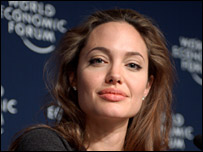 Responding to a question from the floor, Lieberthal said
that the US should do a better job of coordinating the
management of its bilateral ties with China and Japan
since the US is a key factor in the dynamic between the
two countries. Participants agreed that the crisis over
Iran's nuclear programme is likely to test US relations
with China and India. Mahbubani underscored that all
the countries in Asia value the American presence in the
region as a stabilizing force. Nobody is calling for
the US to withdraw.

During the session, No-rio Yamanoi, Editorial
Cartoonist, Japan, presented a drawing that promoted a
"Buddhist economy" for Asia, one that "harmonizes
economics and happiness". 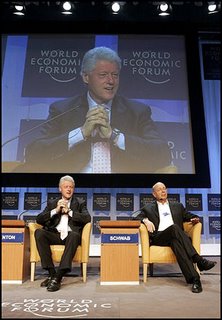 Former U.S. President Bill Clinton, left, speaks during
a special address at the World Economic Forum in Davos,
Switzerland, Saturday Jan. 28, 2006. The World
Economic Forum turned its eye toward politics and the
Middle East Saturday, with visitors and leaders focusing
on Iran's push to develop nuclear power and creating
calm in neighboring Iraq. Seated right is Founder and
Executive Chairman of the WEF Klaus Schwab. 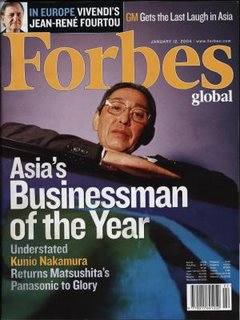 The rapid growth of China and India is changing mindsets
and not just trade and investment flows. Some believe
robust intra-Asian trade will eventually offset the
region?s exposure to economic cycles in the United
States. Others see looming challenges linked to
demography and to tensions rooted in history that pose
threats to future growth and stability.

Japan and China face rapidly ageing populations while
India and Indonesia must create jobs for growing numbers
of young workers, mainly from rural areas. Business
must now contend not only with the scarcity of highly
skilled workers but also with the dangers of income
disparities in growing markets. It is clear that Asia
is entering into an era of fresh opportunities and
emerging risks, and requires strategies that anticipate
the region?s evolving agenda.

"It is in this strategic context that a select group of
global leaders will gather at the World Economic Forum
on East Asia to shape the region?s industry, political
and economic agendas. The industry agenda will focus on
the growing convergence, consolidation and competition
across critical regional sectors such as ITC and
finance. The political agenda will highlight the
urgency to deepen regional cooperation in new areas
linked to Asia?s growing demand for energy and raw
materials. It will also focus on building stronger
trilateral relations among China, Japan and Korea,
integrating India further into East Asia and improving
the competitiveness of ASEAN economies."
Posted by Unknown at 11:34 AM No comments:
Email ThisBlogThis!Share to TwitterShare to FacebookShare to Pinterest
Newer Posts Older Posts Home
Subscribe to: Posts (Atom)