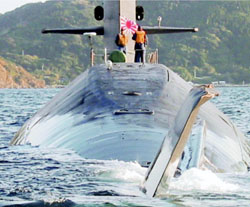 "All through your Army careers, you men have bitched
about what you call "chicken shit drilling". That,
like everything else in this Army, has a definite
purpose. That purpose is alertness. Alertness must
be bred into every soldier. I don't give a fuck for a
man who's not always on his toes. You men are
veterans or you wouldn't be here. You are ready for
what's to come. A man must be alert at all times if
he expects to stay alive..."


- After the Ehime Maru* dramatic events off Hawaii, an
other emerging sub, a JMSDF this time, spurs a
civilian vessel in south Japan seas. One cannot be
that much surprised with this sequel to the "In the
Japanese Navy recent episodes".

Lots of work to do to train the Japanese Navy, one can
therefore understand the reason why the JMSDF Admiral
Saito succeeded to General Massaki as new Chief of
Staff, Joint Staff Office of the Japan's Self-Defense
Forces (Japanese Armed Forces) instead of the normal
go that was to offer the Japan top military job to a
Japan Air Self Defense Force General.

"A Japanese military submarine collided with a
civilian vessel during exercises off southern Japan on
Tuesday, November 21st, officials said. The Maritime
Self-Defense Forces submarine brushed against a tanker
carrying chemicals as it surfaced about 30 miles (50
kilometers) off the southeastern coast of Miyazaki, on
the southern island of Kyushu, a defense agency
spokesman said on condition of anonymity by protocol.

The civilian vessel was later identified as the
Panamanian-registered 4,000-ton Spring Auster, en
route to China, Coast Guard spokesman Takatoshi
Nagasaki said. None of its crew of 16 Philippine
nationals and a South Korean was hurt, but the extent
of the damage was not immediately known, he said. No
injuries were reported among the 75 crew on the
submarine Asashio. It apparently hit the ship's hull
while surfacing, and the top part of the submarine's
aft fin had been dented by the impact, the defense
spokesman said.

The cause of the accident was not immediately known.
The submarine had re-submerged and was expected to
enter a nearby defense port for inspection, he said.
Coast Guard officials made radio contact with the
Spring Auster, whose crew reported feeling a small
impact. They maintained course because no other
vessel was in sight, Nagasaki said. No leakage was
reported from the tanker, which would be inspected by
Coast Guard officials at a nearby port, the defense
spokesman said" (Agencies)

- * About the Ehime Maru tragedy :

On 9 February 2001, while hosting a "Distinguished
Visitor" cruise for several civilian guests,
Greeneville conducted an Emergency Main Ballast Tank
Blow, a dramatic maneuver that brings the boat to the
surface so rapidly her bow rises high out of the
water. Two of the civilian guests were at the
submarine?s controls during this maneuver.

At about 1350 HST, Greeneville?s rapidly-rising stern
struck the aft port quarter of Ehime Maru, a Japanese
fishing and high school training vessel, operated by
the Ehime Prefectural Uwajima Fishery High School.
The specially reinforced upper blade of Greeneville?s
rudder sliced through Ehime Maru?s engine room. Ehime
Maru sank in less than ten minutes. Nine crewmembers
of Ehime Maru drowned, including four high-school
students.[1] Eight days after the sinking, 17
February, the Supervisor of Salvage and Diving
(SUPSALV) and Submarine Development Squadron 5
(SUBDEVRON 5) located Ehime Maru in 2000 ft (610 m) of
water. The Navy contracted the Dutch company Smit
International and Crowley Maritime Corp.,
headquartered in Washington, to salvage the wreck of
Ehime Maru. It was lifted and carried, still
submerged, closer to Oahu. On 14 October 2001, the
wreck was set down in 115 ft (35 m) of water. This
operation was the first time such a massive object was
recovered intact from such a depth. On 15 October,
the first team of divers from Mobile Diving and
Salvage Unit 1 (MDSU 1) began assessing the sunken
vessel. Working in low-to-zero visibility conditions,
divers from MDSU 1, aided by Japanese divers,
conducted 534 dives over 29 days, searching the wreck.
The divers recovered the bodies of eight of the nine
missing crewmembers, many personal effects, and
several items unique to the ship, such as its
nameplate, bell, and helm.

The Ehime Maru memorial is located in Kakaako
Waterfront Park in Honolulu, Hawaii. On 25 November,
Ehime Maru was again lifted, towed back out to sea,
and scuttled in 8,500 ft (2,600 m) of water south of
Barbers Point, witnessed by three of the crewmembers'
families. The total cost of salvage operations was
about U.S. $60 million. A memorial [pict.] in Hawaii
to Ehime Maru and her dead has been constructed.

Commander Scott Waddle, who commanded Greeneville
during the collision, accepted full responsibility for
the incident. A court of inquiry found that there had
not been a sonar or periscope scan of the immediate
vicinity before surfacing. Waddle was reprimanded,
but Navy officials decided against a court-martial and
let him retire honorably with his rank and pension
intact. Waddle's apology to the victims' families was
delayed, because, as he wrote in The Right Thing
published in 2003, "the [Navy's] settlement process
... would have been interrupted. It was decided
while I was on active duty before I retired in October
of 2001 that visiting Japan was not in the best
interest. After I retired in October, it took me some
time to find employment. I finally found employment
in August and from that time, the resources were not
available to get me to Japan. But at the earliest
opportunity I did make that trip when I could ..."

End of quotes.
Posted by Unknown at 9:24 AM No comments:
Email ThisBlogThis!Share to TwitterShare to FacebookShare to Pinterest
Newer Posts Older Posts Home
Subscribe to: Posts (Atom)