Why EU and Japan stays far apart on a Free Trade Agreement? Because of the TPP… 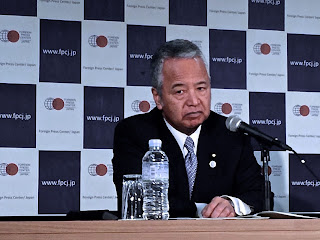 On FTA Japan Europe,  Japan and the European Union, which agreed to launch FTA talks in March 2013, started this week their negotiations in Tokyo. One of the areas where we definitely need to see liberalisation on the Japanese side is the agriculture sector, especially food and drinks, EU negotiators said. The answer of Japan came very abruptly on Monday by Mr. Akira Amari, Minister in charge of Economic Revitalization. Amari had hard words on Europe scarcely heard from a Japanese official, I asked Mr Amari a question about EU-Japan FTA negotiations versus TPP at a fascinating briefing at FPC Japan, in Tokyo, November 30th opened to foreign press and embassies.

Amari was tough. Proof that Japanese politicians of this magnitude know exactly what they do and say, no-one here writes it for them. Proof too that there is a malaise in the construction of TPP versus Europe. I do not recall any statement of this magnitude in recent months between Japan and Europe, interesting enough.

The Trans-Pacific Partnership is the most important trade agreement in world history, in both economic and geopolitical terms. It incorporates 40% of the global economy, including its largest and third-largest countries. It will increase the income of the participating countries by almost $300 billions. It sets the stage for eventual expansion into a comprehensive Free Trade Area of the Asia Pacific that will include virtually every country in the region, perhaps including China and India. This is if you are optimistic. Integration mechanism also show huge imbalance between Asian and Pacific nations and the U.S. in matters of development and political systems.

The European Union, over 50 years of existence, its original Common Market was created of six countries, it was much smaller than the TPP. But today the European Union is a politico-economic union of 28 member states that are located "primarily" in Europe, North to South West to East, it included ex Soviet Union nations and incorporated the new comers into its integrated political and economical system. Europe covers an area of 4,324,782 km², with a population of over 508 million Europeans.

The European Union (EU) is a politico-economic union of 28 member states. EU traces its origins from the European Coal and Steel Community (ECSC) and the European Economic Community (EEC), formed by the Inner Six countries in 1951 and 1958, respectively. Then the community and its successors have grown in size by the accession of new member states, and, in power by the addition of policy areas. The Maastricht Treaty established the European Union under its current name in 1993 and introduced European citizenship. The latest major amendment to the constitutional basis of the EU, the Treaty of Lisbon, came into force in 2009.

By comparison, the TPP includes only 12 countries and is only a free trade agreement between the U.S. and Japan. These two countries together account for about 60% of its economic relations. Some models show that, by 2025, its exports and imports will each grow by $140 billion annually and its national income could reach more than $100 billion.

The geopolitics of the new TPP agreement wishes to be more important than its economics. After Europe, the TPP will provide the first binding institutional ties between the U.S. and East Asia. But there is a major geopolitical risk that the Asia-Pacific region could divide into two broad economic zones if China does not join the TPP. In matters of integration, Europeans have the know-how, TPP is still at the beginning of its not yet decided structural path.

On November 25, 2015, Japan adopted the General Policy Framework of the Trans-Pacific Partnership (TPP). Still unclear on issues such as food among other items.

For Europeans, a free trade agreement between the European Union and Japan, should not replicate the Trans-Pacific Partnership concluded by the United States, Japan and the 10 other Pacific Rim countries. In this context, Japan and the European Union, which agreed to launch FTA talks in March 2013, started this week their negotiations in Tokyo, which will be the last round for this year 2015.

Positions are still far apart in many areas. The negotiations will move well into next year according to Bruxelles’negotiators. “The EU is ready to eliminate its tariffs on automobiles provided that concessions received in return will be sufficient.

NB: After the interview, I asked Mr Amari if he would drink Chili wine or Bordeaux when he is going to the restaurant with his guests and friends, he looked at me with a big smile and gave me a gentle tap on the arm with un "air entendu"...!