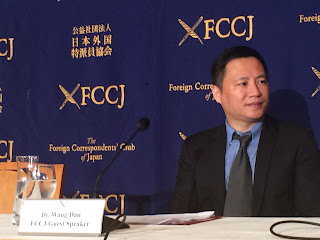 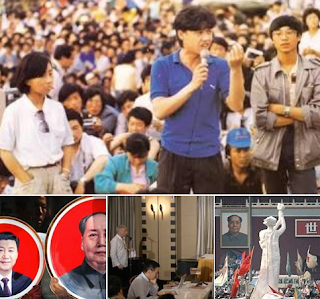 I asked 2 questions to Wang Dan: The first about China under Xi Jinping today and a second about statesman Deng Xiaoping era. On this point about Deng Xiaoping I testified of my experience in Peking (my 1st work assignment for France Inter and RFI before "Tiananmen"). China at that time I said to Wang Dan, then 20, lived an amazing freedom, liberalisation and reforms set by Deng followed by the early challenges to the CCP. I also talked with Wang Dan after-while and quoted examples with some of my first meetings, dinners, Beijing opera, lectures, with Chinese top leaders in late 80's in Peking.

Xi Jinping is General Secretary of the Communist Party of China, the President of the People's Republic of China, and the Chairman of China's Central Military Commission. 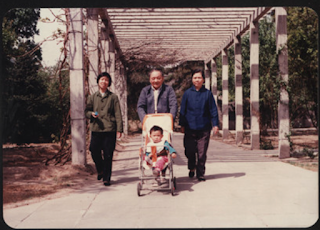 Deng Xiaoping walking with his grandson

I always was interested in the life of Deng Xiaoping. Deng early life drove him to France and in my family ふるさと homeland, Normandie, Bayeux exactly, on October 21st 1920. The young Chinese man who was to become the leader of the People's Republic of China confronted his life to a modern and powerful France, and so were France's politics and unions.

Deng Xiaoping should have never left Normandie, and it would have changed the world history. Instead he opted, penniless, for the industrial nightmarish life of a labourer in "Le Creusot" France, then to the Hutchinson-Montargis and finally at Renault-Billancourt! Eventually, Deng Xiaoping went on with his political career while building cars and making an extra Franc in a Tofu restaurant, and gathered with his friends, one being Zhou Enlai. They created in 1922 the Chinese Youth Communist party in Europe for Chinese and gathered in a Paris café near Place d'Italie while editing the "Red Light" party paper. Deng joined and took more importance in the group, became close to Zhou Enlai and as their group caught French police attention, Deng left France January 7th 1926, just one day before to be arrested by French police.

My blog reader might wonder why I mention all of these details... It is because I was assigned during my job at the Chinese ministry of Television and Radio in the late 1980's in Peking to study all documents related to this period of life of Deng Xiaoping in the 1920's. My job was to study, explain, describe, put into context the offical documents that were in the hands of some Chinese officials, a small group that might have been called upon by the top leader himself, well that's what I was told, and also to keep my mouth shut. I was a very young and straight reporter announcer, quite inexperienced with Chinese leadership methods of power and ruling but I guess they trusted me to describe things. Later on I was invited to attend some international youth parties at the Great Hall of the People 人民大會堂 escorted by my colleague as interpreter (she couldn't believe she was to meet top leaders) where I met Hu Yaobang, Zhao Ziyang and others such as Li Peng in banquets. There  we were allowed to spend time and chat. It was maybe the beginning of a new history. 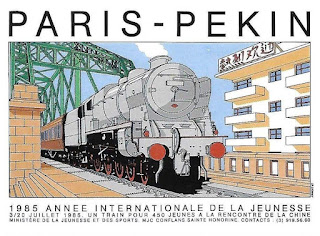