Oil shock? Use rice as a gasoline!

In a period of energy restriction, food crisis and limitations of food self-sufficiency in many countries, I just went to Niigata city on the Japan Sea coast with the Foreign Press Center press tour as I heard about some high-tech development for wise consumption and for the energy and the automotive industry. What a surprise when I saw the great plains or Niigata producing the famous rice brand "Koshihikari", a best among the best Japanese rice! Beautiful taste!

Rice is Japan’s representative agricultural product and new initiatives have begun in Niigata as a core rice-growing region. New trends include the use of rice flour to make bread, noodles and cakes instead of imported wheat. Seeking to produce and consume energy locally, a demonstration rice-plant bio-ethanol project has also been launched using a high-yield strain and bio-ethanol production is due to begin at Niigata’s East Port at the end of this year. Visiting Niigata, where we can see the Koshihikari rice harvest at its peak, we will do a story on the rice, today and tomorrow.

But Niigata is not just about rice, Niigata city under the dynamic Mayor Shinoda Akira, an ex-journalist from Niigata Nippo shimbun, looks far away as far as energy and food are concerned. (These two sectors are harshly targeted in the financial crisis currently jolting our world)

Niigata is the only place in the world where I will be able to use rice to move my car! How ? Thanks to bio-ethanol! Niigata city experienced a reduction of her agricultural population and re-organization had to be set under cooperatives and individual initiatives. You know how Japanese society can move fast when it wants! Here bio-ethanol is not to be the tool to destroy fields of rice (in other countries it is palm trees or corn) Here it is wisely limited harvest to unexploited rice fields and transformed thanks to the efforts of the city and academics such as researcher Mochizuki san (he also is an ex journalist of Niigata Nippo!)

Bio-ethanol production is becoming popular here and there all over the world. It is developed using local agricultural products, for instance, maize in the United States and sugarcane in Brazil. In fact, it is becoming a controversial issue inviting various opinions and criticism.

In Niigata, they use rice, the main agricultural product, and have launched a demonstration project, in which they grow rice, produce ethanol from it, and sell the ethanol-compound gasoline. The project is led by JA Zen-Noh Niigata (Agricultural Cooperative Association) in an association of the regional council member organizations including Niigata City and Prefecture.

In the program for FY2008, the strain “Hokuriku 193”, a high yielding variety, is currently being grown in the rice paddies in the cooperation of local farmers. At the end of this year, an ethanol production plant will appear at the Niigata East Port and start its operation.

It is expected that the cultivation of the high yielding “Hokuriku 193” strain, will be 2250 tons, and bio-ethanol production 1,000kl. The project also aims to contribute to the rice production adjustment, as it uses fallow rice fields and rice that is not intended as a staple food.

Then the bio-ethanol produced will be mixed with gasoline at the Zen-Noh Niigata Petroleum Station in the Port. Finally, in March 2009, the end product will be supplied at the JA-SS gas stations in the region.

Well maybe you want to know the name of this new product... well I give you a secret: there is a contest opened for naming this new car fuel. Take your chance and contact the City of Niigata. I am quite sure the laureate will receive a great price to propose as City officials Yamaguchi and Enomoto san told me. Who knows? Maybe you could start gardening your own fied of dreams?
Posted by Unknown at 9:51 PM No comments:
Email ThisBlogThis!Share to TwitterShare to FacebookShare to Pinterest 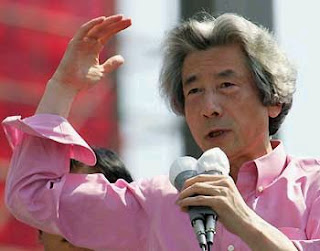 "I believe I have served out my role as a Diet member by carrying out the grave responsibilities of prime minister," Koizumi said before a packed crowd of supporters at a meeting in his home district of Yokosuka, Kanagawa Prefecture. "I bet my entire life as prime minister and have realized that I can bet no more." Of his son, he said, "I might be called a silly parent, but I think he is more reliable than I was when I was 27 years old. I would appreciate it greatly if you could provide Shinjiro with your generous support." 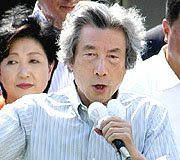 More than a politician, he was a pop idol alike type of men but also a shrewd and ingenious politicians who jolted the establishment of a politically incorrect archipelago. Junichiro Koizumi has attracted exceptional media attention from the moment he was tapped for Japan's top job. He is still missed. Is he to remain out of sight or would he rather be the next Kuromaku of Nagatacho's fuzzy world? 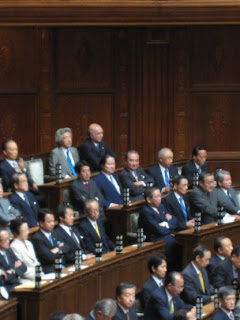 Facts:
Former Prime Minister Junichiro Koizumi formally announced on Saturday his intention to retire from politics, saying he will not run in an upcoming House of Representatives election. Koizumi, 66, also named his second son and secretary, 27-year-old Shinjiro Koizumi, as heir apparent to succeed him in his constituency, the Kanagawa No. 11 district of the lower house.

Koizumi did acknowledge criticism about giving his political base to his son, saying, "I too was criticized for being a third-generation politician." But he reminded his supporters that they "cheered for me and let me win elections."

Taking the podium from his father, the younger Koizumi said, "I've made up my mind to stand in the next House of Representatives election" from Yokosuka and Miura, his father's constituency.

"I will do my best so I can become a politician who can have you get high hopes on politics. I would like to ask you for your continued support," he said to a roaring crowd.

Shinjiro Koizumi has been working in his father's office as a secretary since last June following graduate studies at Columbia University in New York City and then a stint at a think tank in Washington close to Michael Green.

Although retiring as a lawmaker, Koizumi said he intends to continue "political activities," which he said include using his advisory post at a think tank specializing in international affairs. He said he wants to focus his energy on two policy areas -- making environmental protection and economic development work, and food safety.

As to why he made the announcement at this timing, Koizumi said, "After finishing my tenure as prime minister, frankly speaking, I also wanted to quit as a lawmaker immediately afterward...but I thought it would be problematic if I quit without serving out my term (as a lawmaker)."

Koizumi, currently in his 12th term, was first elected to the lower house in 1972 and subsequently reelected 11 times. Besides his premiership, he has been health minister and posts and telecommunications minister.

Serving as prime minister from April 2001 to September 2006, Koizumi promoted structural reforms including privatization of Japan's postal system as well as road-related public corporations. While in office, he made two trips to Pyongyang in September 2002 and May 2004 for talks with North Korean leader Kim Jong Il and secured the release of five Japanese abductees and their families. He led his ruling Liberal Democratic Party to a landslide victory in the 2005 House of Representatives election, focusing campaigning on the issue of postal privatization. Koizumi also remained a staunch supporter of the United States, Japan's closest security ally. When the United States went to war against Iraq in 2003, he quickly expressed support for the U.S.-led invasion. But Japan's diplomatic ties with China and South Korea soured during his term as he repeatedly visited the war-related Yasukuni Shrine in Tokyo. Critics say Koizumi's structural reform drive has widened income disparity as well as gaps between urban and rural areas.

Koizumi family in Japanese politics since the early 1900s.

Matajiro Koizumi (1865 - 1951) – Minister of Posts and Telecommunications, he was known as the "wild man" and "tattoo minister" because of a large dragon Japanese tattoo on his back.

Junya Koizumi (1904 - 1969) – Son-in-law of Matajiro, he built a kamikaze airfield in 1944 at Kaseda, Kagoshima. Served as Director General of the Japan Defense Agency. 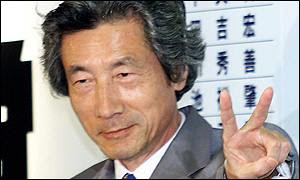 *To have some more details about Junichiro Koizumi, click on the title of this thread.
Posted by Unknown at 11:23 AM No comments:
Email ThisBlogThis!Share to TwitterShare to FacebookShare to Pinterest
Newer Posts Older Posts Home
Subscribe to: Posts (Atom)