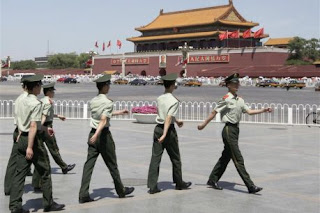 Paramilitary police officers in Beijing, China, on Thursday patrol the area around Tiananmen Square during a flag-lowering ceremony. Twenty years ago, Beijing Tiananmen looked like this: 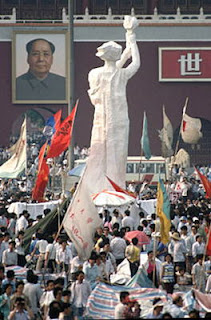 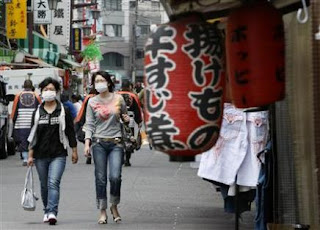 Posted by Unknown at 8:47 AM No comments:
Email ThisBlogThis!Share to TwitterShare to FacebookShare to Pinterest 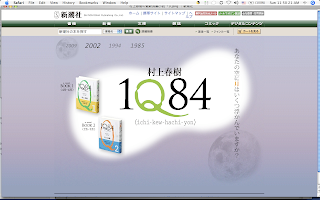 Marketing was perfect at publisher Shinchosha. Fans ordering the book knew nothing but the title: "1Q84," it can be read as "1984" in Japanese. Haruki Murakami’s first novel in five years is a two-books work and "1Q84". 500.000 reservations came to bookshops, initial print run of the work is first printing to 480,000 copies. A hint at George Orwell's "1984" everyone said, but I doubt. Still I have to read the books and suspect the author plays imagination as he never did.
Murakami, 60, is one of the most widely translated Japanese writers alive, with bestsellers such as "Norwegian Wood," "Kafka on the Shore" and "The Wind-Up Bird Chronicle." But in the case or Murakami born in 1949 in Kyoto and educated at Waseda university of Tokyo, marketing was cleaver enough to release the book before the week end, time for us to dive in Murakami's world of fantasies.
"I’ve been writing a new full-length novel continuously for the last two years – I started writing it right on Christmas two years ago – so for that whole time, I was getting up every day at some time between 2 and 4 in the morning and writing for four or five hours. During that period, I did take time off for vacation, but I think it was only about 10 to 20 days. Sitting there in front of my desk everyday for four to five hours straight, that was pretty tough."
(Courtesy of the web: howtojaponese.com and Shinchosha publisher)
A literature Nobel price to come?
Well, hard to say. A recent episode rings the bells, when the author visited Israel to get a price. There he did a bit of noise, same as an Orwellian world...  Murakami was named winner of the 2009 Jerusalem Prize for the Freedom of the Individual in Society; it is is a biennial literary award traditionally bestowed upon authors whose work has dealt with human freedom, society, politics, and government.
But here again Murakami surprised all in his speech: The usual complexity of the author had this to say in an article published in the Bungei Shunju literary journal where he  strongly condemned Israel's attitude towards the Palestinians.
"Israel has adopted a policy that seals off the Palestinians inside the West Bank and the Gaza Strip, a policy that denies the refugees' right to return to their land in order to protect the interests of the Jewish people; this is unjust," Murakami wrote. He decided to accept the Israeli prize believing this would allow him to speak freely in front of an Israeli audience. While Murakami notes that "Israel isn't a tyrannical state and is founded on free speech, I sense a very strong patriotic approach when I talk to Israelis. The schools instill it in them through the official history, and three years of military service for boys and two years for girls is mandatory."
Murakami's visit to the Yad Vashem Holocaust Memorial Museum prompted him to come up with the following insight: "I think that the State of Israel suffers from some sort of trauma. The brain tells them that excessive self-defense is not good, but their body spontaneously responds to the slightest of provocations."
Israeli Foreign Ministry said in response to the article: "The State of Israel is proud for having presented the Jerusalem Prize to Murakami and respects his right to express his opinions on current affairs. "However, Israel regrets the fact that the author, who is highly popular in Israel, preferred to adopt some inaccurate generalizations about the Middle East conflict, without knowing the facts. We would be happy if during his next visit in the country the author would find the time to learn more about Israel and the reality in the region." (Quotes: http://www.ynet.co.il)
Previously during his speech of admittance, about the time of the Gaza confrontation, earlier this year, Murakami compared humans to eggs. "If there is a hard, high wall and an egg that breaks against it, no matter how right the wall or how wrong the egg, I will stand on the side of the egg. Why? Because each of us is an egg, a unique soul enclosed in a fragile egg. Each of us is confronting a high wall. The high wall is the system which forces us to do the things we would not ordinarily see fit to do as individuals..."
"... Like most novelists, I like to do exactly the opposite of what I'm told. It's in my nature as a novelist. Novelists can't trust anything they haven't seen with their own eyes or touched with their own hands. So I chose to see. I chose to speak here rather than say nothing."
CQFD 2009...
Posted by Unknown at 11:48 AM No comments:
Email ThisBlogThis!Share to TwitterShare to FacebookShare to Pinterest
Newer Posts Older Posts Home
Subscribe to: Posts (Atom)