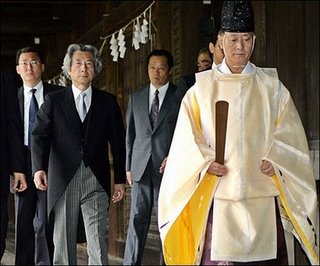 On Tuesday Koizumi apologized again for the "huge
damage and suffering" Japan inflicted on Asian nations
in the 20th century, hours after his visit to the
controversial war shrine. "Our country caused huge
damage and suffering to a number of countries,
particularly people in Asia," Koizumi told a secular
official ceremony marking the 61st anniversary of
Japan's surrender.

But on the same day Japanese Junichiro Koizumi's visit
to the Yasukuni Shrine, a symbol of Japan's past
militarism, has stirred anger and protests from people
across China and in other Asian countries. 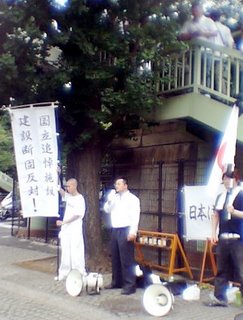 One BIG difference : he simply bowed once, fast, and
entered into the Shrine. A way to show the simplicity
of his visit according to commentators and not a
religious visit accomplished as Prime Minister...
Families of the tragedy of a war launched by Japanese
militarists and their Zaibatsu allies using Hirohito
as the head felt some comfort but Asia got mad.
Symbolic of the Japanese rulers discrepancy between
words and actions of peaceful coexistence's promises. 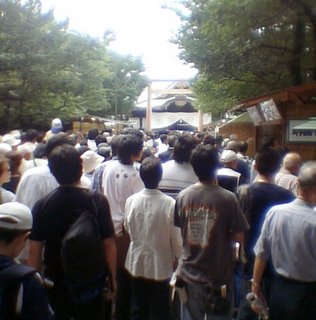 Member of Taiwan's Parliament Kao Chin Su-mei and
other demonstrators from Japan and Taiwan protested
against Japan's Prime Minister Junichiro Koizumi's
visit. Anti-Japan protesters demonstrate outside the
Japanese Embassy in Beijing. The banner reads
'Congratulations on the 61st anniversary of Japan's
fascist surrender'. It was Koizumi's sixth visit to
the shrine since taking office in 2001, but his first
on the highly symbolic Aug. 15 anniversary of Japan's
1945 defeat. Last protesters outside the Japanese
consulate in Hong Kong burnt a Japanese military flag
featuring a photograph of Japan's Prime Minister
Junichiro Koizumi defying warnings from South Korea
and China not to go.

The China-Japan Friendship Association issued a
statement yesterday, expressing "outmost indignation."
The shrine is the "ideological prop and a tool of
Japanese militarists during World War II. It still
honours 14 war criminals whose hands were stained with
the blood of the people in China and other countries,"
it said. "Koizumi's act resurrects Japan's wartime
militarism," the statement says. More than 30 Chinese
people gathered outside the Japanese Embassy in
Beijing yesterday morning, protesting Koizumi's shrine
visit for about 20 minutes. 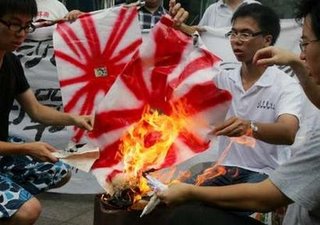 In Nanjing, capital of Jiangsu Province, She Ziqing, a
74-year-old survivor of the Nanjing Massacre, was
outraged by Koizumi's visit. "How can he feel no
regret for the brutal deeds of Japanese militarists?"
he asked. At least 300,000 Chinese, most of them
civilians, were slaughtered by Japanese troops in a
six-week orgy of killing, raping, looting and burning
in 1937 when the city, then the national capital, was
overtaken. Another survivor, Li Xiuying, 76, made a
simple comment on Koizumi: "I hate him." In Hangzhou,
capital of Zhejiang Province, survivors of Japan's
germ warfare were also "indignant." Yang Dafang, whose
father died as a result of Japanese germ warfare in
1940, said Koizumi's repeated visits to the shrine
have hurt the feelings of the Chinese victims. During
the war, the Japanese army's Unit 731 developed many
biological weapons using plague, anthrax and other
bacteria, and conducted experiments on humans. 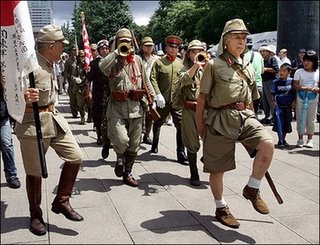 In Hong Kong, angry activists took to the streets to
condemn Koizumi's shrine visit. At least 30 people
marched to the Japanese consulate, carried banners and
shouted slogans. They set a Japanese flag alight and
demanded the country pay compensation and apologize
for war crimes. David Ko, chairman of the Action
Committee for Defending the Diaoyu Islands, said
Koizumi's move aims to stir Chinese anger against
Japan on the 61th anniversary of Japan's surrender in
World War II. "He just wanted to provoke Asian
countries. He's about to step down but the spirit of
Koizumi will not stop. That puts peace and safety in
Northeast Asia under serious threat," Ko said. 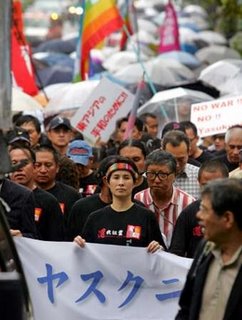 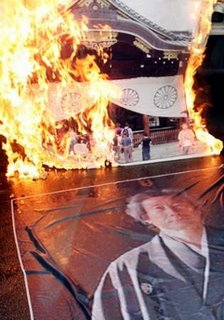 Tokyo Gov. Shintaro Ishihara made his seventh
straight Aug. 15 visit to Yasukuni since 2000, which
was his second year in office.National Public Safety
Commission Chairman Tetsuo Kutsukake, one of the 17
ministers in Prime Minister Junichiro Koizumi's
Cabinet, visited Yasukuni. In addition, three senior
vice ministers and three parliamentary secretaries
went to Yasukuni on Tuesday as part of a nonpartisan
group that makes visits en masse to the shrine.
Fifty-six members of the group, including ruling
Liberal Democratic Party and opposition Democratic
Party of Japan lawmakers, paid homage together
Tuesday. Seven members of another group comprising
LDP lawmakers serving their first terms also paid
their respects at the shrine.

Junichiro Koizumi offered flowers as he paid tribute
at Chidorigafuchi national cemetery, Japan's
nondenominational tomb of the unknown soldier, in
Tokyo after he visited the nearby Yasukuni shrine.

His visit to Chidorigafuchi : A symbolic Japanese
national statement towards the future Asia
reconciliation from soon to be and extremely popular
in the archipelago Diet man Junichiro Koizumi?
Nevertheless it also is a possibility that a mark of
commemoration by one war looser nation will continue
to be seen as an international incident by other Asia
nations.

Time for Asia to work on history and German France
reconciliation. 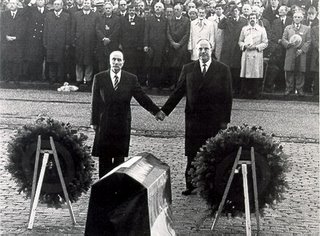 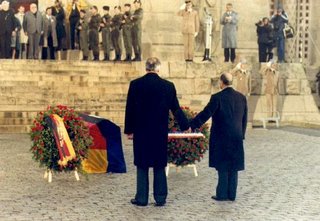 Jlk
Posted by Unknown at 11:34 AM No comments:
Email ThisBlogThis!Share to TwitterShare to FacebookShare to Pinterest
Newer Posts Older Posts Home
Subscribe to: Posts (Atom)