Shadow of disgrace on Tokyo 2020 Olympics? 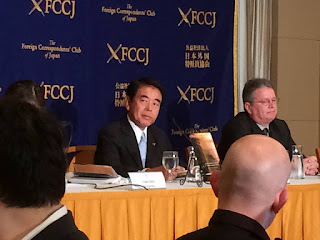 Former minister in charge of sports and education Hakubun Shimomura, on the left of the photography, is also one of ex-persons in charge of Japan Olympics, he is here invited to give a press conference at Fccj to talk about his book on Japan and Ise Jingu (Shrine) region where the G7 is to be held May 26/27 2016. "He oversaw preparations by the Organising Committee for the 2020 Summer Olympics on behalf of the national government in Tokyo before being replaced by Olympics Minister Toshiaki Endo on June 25, 2015" according to press reports. So I asked him about Tokyo 2020 games.

When I asked my question about what he knows about the structure of Tokyo 2020 application for the Olympics, and if there was room for corruption, the translator (brought in by the publisher and not by the club as it is normally) did not translate my question at all as asked. She asked something like what is Japan bidding committee. She did not mention clearly the issue of room for corruption. This was checked by my table people attending (Japanese people and some foreigners having a good command of Japanese language) At Fccj, English is the working language. Shimomura's answer was therefore nothing related to my question while an investigation is conducted about how Rio and Tokyo obtained the games, while Interpol launched an investigation on the topic, and while the matter is "under French police scrutiny" as the international press revealed recently.

It is regrettable that the club did not choose a good interpreter, it is structurally disappointing that the moderator (R on the picture) did not intervene to correct the facts. This Olympic Games issue is watched by justice and police all around the planet, adding to the Billions of people who are fans of the Olympic Games, to the athletes who participate while the Japanese citizens too are tired of corruption which seems to be a Global Value nowadays... This should be clarified. Besides what happened is ethically intolerable situation for the Fccj foreign correspondent's press club and is shocking for those of us, media and accredited journalists, press club's members.

Posted by Unknown at 9:52 AM No comments:
Email ThisBlogThis!Share to TwitterShare to FacebookShare to Pinterest
Newer Posts Older Posts Home
Subscribe to: Posts (Atom)