Life begins at 70 for Fukuda who goes fishing 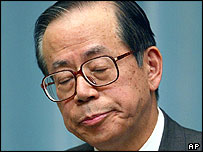 Former Chief Cabinet Secretary Yasuo Fukuda said
Friday July 21st that he would not run in the Liberal
Democratic Party's presidential election in autumn.
This was a serious blow to the supporters of Fukuda
who lobbied for him expecting gains from his
candidacy. His decision is explained by Fukuda's
flock as "one made by a responsible politician who
earnestly considers the future of the nation". Fukuda
reportedly decided against throwing his hat in the
ring because he thought running for the presidency
would stir up Yasukuni Shrine visits as a key campaign
issue.

Fukuda has been circumspect about visits to the
shrine, whereas Chief Cabinet Secretary Shinzo Abe,
the prime contender to eventually become the next LDP
president and therefore prime minister, has not been
shy in expressing his support for visits by lawmakers
to the shrine.

In opinion polls on prime ministerial quality, Mr.
Abe Shinzo, current chief cabinet secretary, has
scored about 50 per cent, while Fukuda has only been
able to muster about a mere 18 per cent approval
rating. The move, however, comes as a disappointment
to observers who considered Mr. Fukuda more able to
build friendly relations with China and South Korea by
vowing to shun visits to the Yasukuni shrine, which
honors convicted war criminals, and a steadier pair
of hands when it comes to running the economy. Abe
since admitted he won't go to the Yasukuni shrine
either. 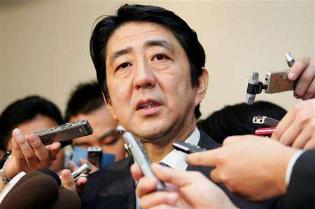 Fukuda had called for updating the last century Fukuda
Doctrine, a policy of conciliation towards the rest of
east Asia. "If I join the race, the issue of Yasukuni
and Japanese diplomacy in Asia will be the biggest
issue. That would divide national opinion into two
blocs. We should avoid such a situation", said an LDP
lawmaker quoting Mr. Fukuda, according to Kyodo wire
news. Mr. Abe's political slap rose greatly after
North Korea test fired missiles, when he warned
Pyongyang that its actions would not be tolerated and
mentioned military surgical strike back against North
Korea. He has also taken a hard line on China at a
time of growing regional friction. His conviction
that Japan should be "normal" again makes him a
natural champion of the sort of active global role
Washington and most European nations' leaders envisage
for Japan.
Posted by Unknown at 10:26 AM No comments:
Email ThisBlogThis!Share to TwitterShare to FacebookShare to Pinterest
Newer Posts Older Posts Home
Subscribe to: Posts (Atom)