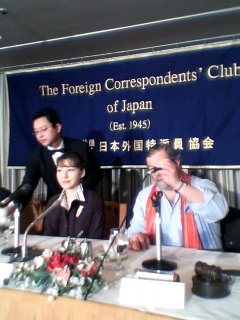 Lawyer states : The conviction last month of a Japanese
Red Army leader for a 1974 attack on the French Embassy
in The Hague was based on politics and not hard evidence.

Once a charismatic leader, Shigenobu now suffers a tumor
in the neck that requires a removal operation and she is
"rethinking" her past revolutionary activities, said her
daughter, May Shigenobu at the FCCJ March 8th, Tokyo.

"She says she did the best she thought at the time, but
of course, looking back, she thinks maybe there were
other ways in which the fight could've been more
effective, more useful, or more efficient," May Shigenobu
said. The founder of the now-defunct group filed an
appeal with a higher court Monday.

Her daughter, May Shigenobu, said the sentence was
unnecessarily severe. "I think it's really a political
case," she said. "I think we really shouldn't just
accept this 20-year punishment and say that this was a
fair trial because this really (was) very, very unfair,"
she told reporters. "She is 60 years old now."

Her mother, a former soy-sauce company worker turned
militant supporter of the Palestinian cause in the 1970s,
had lived in the Middle East for about 30 years before
resurfacing in Japan in 2000 when she was arrested.

Prosecutors originally demanded a life sentence against
her and also filed an appeal Tuesday, a decision that was
criticized by Shigenobu's lawyers. "Prosecutors filed
the appeal with the strong intention of not letting her
out of prison until her death," said one of her lawyers,
Kyoko Otani.

The Tokyo District Court said in the ruling that
Shigenobu did not take part in the 1974 siege personally
but coordinated the operation with the radical Popular
Front for the Liberation of Palestine (PFLP).

"We live in a different era," said May Shigenobu, whose
father was a Palestinian PLFP militant. "It was an era
in which everywhere people were fighting, thinking and
being active against the Vietnamese War and other
oppression around the world. "We forget all that
background and we just pick up a person from there and
choose to sentence him in today's sense, today's values
and today's way of thinking."

Shigenobu's daughter and lawyer also criticized the
inhumane treatment of prisoners at the Tokyo prison where
she is held. They said the former leftist suffers from a
tumor in her neck but is not allowed to have substantial
medical care to diagnose whether it is cancer.

" Fusako Shigenobu, 60, was sentenced in February to 20
years in prison after the Tokyo District Court found her
guilty of kidnapping, confinement and attempted murder in
the 1974 attack. Shigenobu had pleaded innocent, saying
she was not present at the crime scene. But the court
ruled that Shigenobu conspired with three fellow Red Army
members in the attack and played a key role, including
obtaining weapons. One of her lawyers, Kyoko Otani,
however, said Wednesday that the conviction was merely
based on an assumption that Shigenobu must have been
responsible because she was the leader of the group."

"In establishing a conspiracy theory, the court must
provide details such as when, where and how it was
carried out, but the court never did. The conviction was
based on extremely loose fact-finding," lawyer Otani told
reporters at the Foreign Correspondents' Club of Japan.

"The ruling is largely a political decision, which labels
Shigenobu as a terrorist," Otani added.

"NB : The Japanese Red Army, a liberation army group
sympathetic to Palestinian causes, was formed in 1971.
It took responsibility for several international attacks
in the 1970s, including the takeover of the U.S.
Consulate in Kuala Lumpur, Malaysia, in 1975. The group
is also suspected in a 1972 machine-gun and grenade
assault on the international airport outside Tel Aviv,
Israel, that killed 24 people. Shigenobu was arrested in
western Japan in November 2000 after more than 25 years
on the run, most of it in the Middle East. She released
a statement from her detention cell in 2001, announcing
her group was disbanded. The National Police Agency says
seven other members are still on the run. Another key
member is serving his life sentence in the case, with a
third still awaiting trial."
Posted by Unknown at 10:08 AM No comments:
Email ThisBlogThis!Share to TwitterShare to FacebookShare to Pinterest
Newer Posts Older Posts Home
Subscribe to: Posts (Atom)