"Biggest hurdle with be the Upper House election 2007" 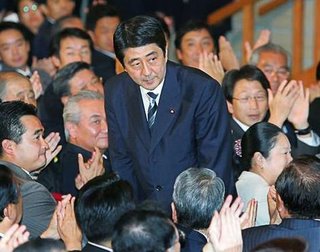 "Commentary by critic Tetsuya Miyazaki on the election of Shinzo Abe:
Biggest hurdle with be the Upper House election

My initial direct reaction was that now the hard part starts. Becoming
prime minister was easy, but it is difficult to hold on to that seat.
The biggest hurdle will be the election for the House of Councilors next
summer. If the opposition camp gains a majority of seats, calls for the
Liberal Democratic Party (LDP) president to take responsibility will be
unavoidable. I also fear that the trend will be to leave things as is.
The next ten months, everyone will have to prepare for the election, so
I would say that only when there is a victory in the Upper House would
things get moving.

The presidential election was a one-sided game with Abe always winning,
but it should have been a proper election with a real competitive match
going on. And despite Abe never having articulated his political
principles, many lawmakers bet on the winning horse unquestioningly. It
was as if even the grass and trees were bowing to Abe.

Ozawa's Minshuto (Democratic Party of Japan) will now come in with such
buzzwords as income disparity, economic recovery, the pension issue, and
Asia diplomacy. The LDP should have been expending every effort on
policy debate in order to meet the enemy in battle. In that sense, one
can only say that the LDP was left out of the race.

As a result of the bandwagon effect, it will not likely be avoidable for
President Abe to make personnel appointments simply as rewards for
supporting him. If he doesn't do that, the lawmakers who supported him
that were not appointed will be disgruntled and turn against him. This
could create trouble in the party as a whole.

On the foreign policy front, he seems to want to carry out a positive
diplomacy toward East Asia. There's a high probability of the mood
shifting toward favoring a thaw in Japan's relations with China.
Although the political forces backing Abe want him to visit Yasukuni
Shrine, he will have to decide whether such a visit should come after
his China diplomacy is on track.

Perhaps the biggest challenge for his administration will be maintaining
the good economic climate. With the absence of Heizo Takenaka [who
resigned from the Diet], the leading force for economic policy in the
Koizumi administration, there is a possibility that the bureaucracy, led
by the Finance Ministry, will regain its policy clout. "
End of quote MAINICHI Shinbun September 21, 2006 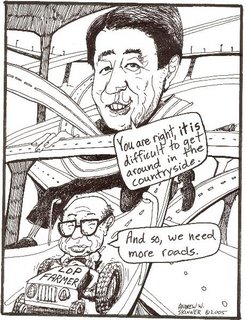 (Image, this is how the foreigners see him...)
Posted by Unknown at 1:16 PM No comments:
Email ThisBlogThis!Share to TwitterShare to FacebookShare to Pinterest

Abe Shinzo : " persons of excellent caliber " to be in charge. 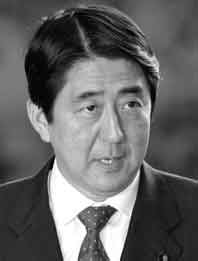 Shinzo Abe, candidate to LDP presidency and PM job
about the 2007 Upper House election : "The purpose is
not to win the Upper House election," Abe said, "We
should let persons of excellent caliber take part in
our work of building an ideal country." Nikkei
September 5, 2006.

Posted by Unknown at 11:53 AM No comments:
Email ThisBlogThis!Share to TwitterShare to FacebookShare to Pinterest
Newer Posts Older Posts Home
Subscribe to: Posts (Atom)