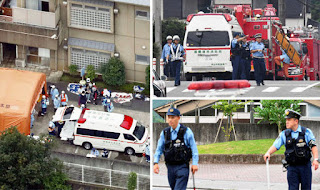 19 people were killed and 26 were severely or slightly injured over the deadly knife rampage at a care facility for people with mental disabilities in Sagamihara, Kanagawa Prefecture, south of Tokyo. The attack occurred in the early hours of Tuesday July 26,2016.

The man, Satoshi Uematsu, was arrested on suspicion of attempted murder and illegal entry into a building. Kanagawa prefectural police department set up an investigation headquarters at Tsukui Police Station in Sagamihara examining his motives and how he started to have murderous intent for severely disabled people.

Uematsu, who was an employee at the facility, Tsukui Yamayurien, in February, told a facility worker that he would kill severely disabled people, according to officials of the Sagamihara city government's mental health welfare department.

Posted by Unknown at 8:53 AM No comments:
Email ThisBlogThis!Share to TwitterShare to FacebookShare to Pinterest
Newer Posts Older Posts Home
Subscribe to: Posts (Atom)