Strange. The Burmese democracy leader Aung San Suu Kyi (picture) faces as long as five years in jail after new charges were brought against her by the military junta following a bizarre intrusion this month at the lakeside home where she lives under house arrest. Suu Kyi, whose detention without charge was due to expire in weeks, now faces a criminal trial after an American man could force the security cordon surrounding the house by swimming across the near by Inya Lake in central Rangoon. Despite pleas for him to leave he stayed for two nights, her lawyers confirmed, and he was arrested by the Burmese authorities as he swam back the following morning. The man, named as John Yettaw, has also been charged with entering a restricted area and with violating immigration laws. News will come out later on.

One article came to my mind about Burma. Not yet a reality, but an option. How about a nuclear Burma-Myanmar in the coming years? "Rich with uranium and desperate for control, the Burmese junta may find a nuclear option attractive", Burma journalist expert Bertil Lintner wrote in a recent scholar review article. [Click the title to access the report]

"Until such reports can be verified, or refuted, speculations remain. But a nuclear-powered Burma would be a nightmare for all neighbors and would upset the balance of power in the region. All that is certain is that Burma has a nuclear program. It may be years, if not decades, away from developing nuclear-weapons capability. But the fact that the country's military leadership experiments with nuclear power is cause for concern."

"Burma first initiated a nuclear research program as early as 1956, when its then-democratic government set up the Union of Burma Atomic Energy Center, UBAEC, in then-capital Rangoon. Unrelated to the country's defense industries, it came to a halt when the military seized power in 1962. New power-holders, led by General Ne Win did not trust UBAEC head Hla Nyunt.

In February 2001, Burma's present junta, the State Peace and Development Council decided to revitalize the country's nuclear program, and Russia's Atomic Energy Ministry announced plans to build a 10-megawatt nuclear research reactor in central Burma. In July 2001, Burma established a Department of Atomic Energy, believed to be the brainchild of the Minister of Science and Technology, U Thaung, a graduate of Burma's Defense Services Academy and former ambassador to the United States. US-trained nuclear scientist Thein Po Saw was identified as a leading advocate for nuclear technology in Burma.

Burma has uranium deposits, and the Ministry of Energy has identified five sources of ore in the country, all low-grade uranium unsuitable for military purposes. But the defectors claim that two more uranium mines in Burma are not included in official reports: one near Mohnyin in Kachin State and another in the vicinity of Mogok in Mandalay Division. The ore is supposedly transported to a Thabeikkyin refinery, conveniently located between the two alleged mines." End of quotes. 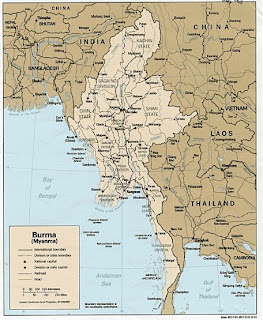 The Australian newspaper wrote in the past that Burma, entertaining good relations with China for its Indian ocean access, "was seeking to acquire missile and nuclear weapons technology from North Korea". [http://tinyurl.com/q47qnq]
Posted by Unknown at 10:33 AM
Email ThisBlogThis!Share to TwitterShare to FacebookShare to Pinterest