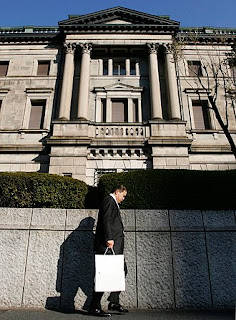 Japan endured an economic and financial malaise in the 1990s known as the "lost decade" after a real estate bubble, built on excessive lending, burst. Insolvent lenders propped up by government bailouts became known as "zombie" banks, and cast a long shadow over the world's second-largest economy.

Banks have repaid 8.45 trillion yen of the 9.6 trillion yen of public money injected into the financial system during the troubled decade. "That was good business in retrospect," Sato said. What Japan underwent offers lessons for the global financial crisis unfolding now, including the need for public money to prop up weakened banks.

Still, it's difficult to cash a foreign check in Japan or for a profitable foreign small and medium company to get a loan from a Japanese bank. They call it economic nationalism. Click here http://tinyurl.com/dbhurz

Posted by Unknown at 8:53 AM
Email ThisBlogThis!Share to TwitterShare to FacebookShare to Pinterest