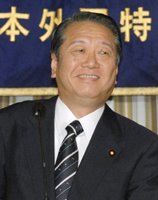 Japan observers would choose Ozawa Ichiro if they were
asked to pick one single Japanese politician who
attracted the most attention in the 1990s. It was
Ozawa who broke off from the Liberal Democratic Party
(LDP) in 1993, and played a leading part in bringing
an end to the LDP's single-party dominance which
lasted 38 years. Ozawa also handpicked Hosokawa
Morihiro to head the fragile eight-party coalition
government. 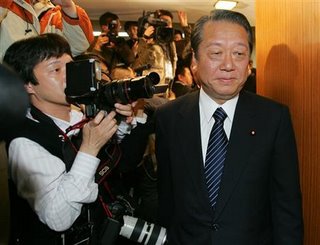 Ozawa, however, is not only active in domestic
politics but also in the foreign policy decision
making. Ozawa was vocal about foreign policy, and he
was consistent throughout the 1990s. He always put
emphasis on a larger international role for Japan, and
he pursued this objective and DPJ Chief does not stop
convincing domestic crowds, international audiences
and foreign correspondents.

The leader of Japan's largest opposition party on
Wednesday denounced government officials' argument of
"ensuring (Japan's) capability to attack overseas
enemy bases" as a baseless fallacy, Kyodo News
reported. Ichiro Ozawa, chief of the Democratic Party
of Japan (DPJ), made the remarks when he was asked by
reporters about his view on the argument that Japan
should consider building the capability to attack
foreign bases in case a missile attack was imminent.
Ozawa said the viewpoint, which was put forward
recently by government and ruling camp figures, was
too "rude" and "extreme." He described the argument as
"dangerous," which he said was intended to legitimize
any preemptive attack whenever Japan named an area as
"overseas enemy bases." 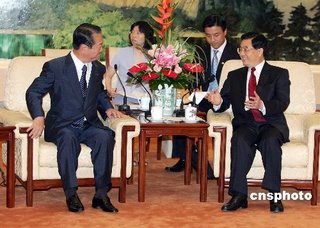 During his lecture at the Foreign Correspondents Club
Japan, Ozawa said he believed the Democratic People's
Republic of Korea's rocket and nuclear technologies
had not reached levels high enough to stage
destructive attacks on Japan and other countries.
Ozawa, a seasoned lawmaker who was elected president
of the DPJ in early April, dismissed the idea of
arming Japan with nuclear power, saying it was "not
favorable both politically and militarily."

Ozawa also strongly criticized Prime Minister
Junichiro Koizumi's foreign policy. "As a member of
the Asian community, Japan should have played an
important role, but the fact is it even failed to
build up reliable ties with neighboring countries," he
said. He added that regaining the trust of other
Asian nations toward Japan was a precondition for
Japan to play a larger role in the region in the
coming decades. (Wire news & report)
Posted by Unknown at 12:46 PM
Email ThisBlogThis!Share to TwitterShare to FacebookShare to Pinterest