Fukuyama : breach of credibility and flawed assumptions since Iraq war 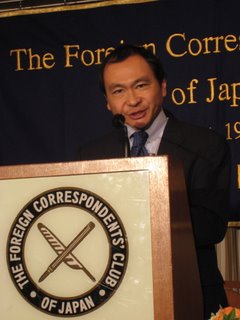 Francis Fukuyama, a former leading light of the US
neoconservative movement, said that the mishandling of
the Iraq war led Iran and North Korea to pursue
nuclear programs. "I think both of those countries
saw what happened in the messy aftermath of the Iraq
war and they decided they would be safer having a
nuclear weapon rather than not," Fukuyama told a press
luncheon in Tokyo at the FCCJ. " And we are now living
with those consequences."

Fukuyama is best-known for his 1992 book "The End of
History and the Last Man", which argued that the end
of the Cold War showed the growing universal
acceptance of Western-style liberal democracy. But he
has since distanced himself from Washington s
so-called "neoconservatives," who led the
controversial invasion of Iraq in 2003 in the name of
remaking the Middle East. Fukuyama said that
President George W. Bush s administration relied on
flawed assumptions.

"You see similar arguments now being made with regard
to Iran - that Iran is not deterrable and therefore
you need to take other active preventive measures," he
said. "Pre-emptive war is not the answer." Both Iran
and North Korea - labeled by Bush as members of an
"axis of evil" with Saddam Hussein s Iraq - have
defied international calls to give up nuclear weapons.
North Korea tested an atom bomb on October 9.

Fukuyama said that lingering emotions from the
September 11, 2001 attacks prevented US foreign-policy
makers from "reasonably" addressing the terrorism
threat. "Even to this day the threat of terrorism
with weapons of mass destruction is overstated, and
it is extremely difficult to articulate a position
that says: "Well, calm down a little bit about this",
he said. Plummeting US public support for the Iraq
war has spurred Bush to undertake a major Iraq
strategy review. (Quotes & agencies)
Posted by Unknown at 10:05 AM
Email ThisBlogThis!Share to TwitterShare to FacebookShare to Pinterest