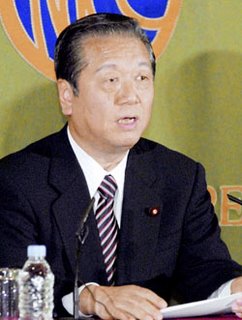 Ichiro Ozawa, the leader of the opposition DPJ,
Democratic Party of Japan, said Tuesday at the Japan
National Press Club he would have urged U.S. President
George W. Bush not to start an "absurd" war in Iraq
in 2003 if he was prime minister at the time.

Ozawa also said the Japanese government should have
explained clearly the reason why Japan made the
decision to support the Iraq war, criticizing the
government for following what he termed as such a
problematic tendency in Japanese society of not being
assertive enough.

His comments came after recent controversial remarks
by Foreign Minister Taro Aso calling the U.S. policy
on Iraq "very naive" and Defense Minister Fumio Kyuma
saying the U.S. led invasion of Iraq was "wrong." "I
would have told Mr. Bush, "Don't do such absurd
things if I had been in the position" of Junichiro
Koizumi who was then prime minister of Japan, Ozawa
said in a press conference at the Japan National Press
Club.

"It is fine to say "we will cooperate," but what I
want to say is that you should clearly explain your
own thoughts such as "we will cooperate because of
this and that." Don't make nonsense quibbles," Ozawa
said.

On domestic politics: Ozawa stressed the importance
for the DPJ to attract voters in the local elections
in April and the House of Councillors election in July
by explaining party policies simply and easily.

As for the revision of the Constitution, which Prime
Minister Shinzo Abe has vowed to realize and highlight
as one of the major issues for the upper house
election, Ozawa said it will be difficult to become a
point of issue in the election campaign because the
public will be more interested in themes which are
closer to their daily lives.

Grilled on secret expenses by politicians: Ozawa also
indicated he may voluntarily disclose details of his
office expenses, which have been criticized by some
Cabinet ministers and senior ruling camp lawmakers for
their huge amount. "There would certainly be time
when such a method should be taken," Ozawa said.

Unclear office expenses have recently surfaced among
both ruling and opposition lawmakers, becoming a
political problem that has attracted public attention
in Japan especially since the resignation of
administrative reform minister Genichiro Sata in
December.

On socia issues: Ozawa said previously at the
Parliament that Japan's income gap the top issue for
the opposition. "Politics should exist for the sake
of those who are vulnerable socially and
economically."

On minister Yanagisawa's comments : When Yanagisawa's
Health minister remark on "child-bearing machines" was
first questioned, many lawmakers in the ruling
coalition thought he should resign. One upper house
lawmaker of the Liberal Democratic Party said: "We
lost women's votes." (Yomiuri)

Japanese Prime Minister Shinzo Abe said he had issued
a warning to his health minister for degrading women
as "child-bearing machines", as approval for his
government continued to slide. Abe was grilled in
parliament by the main opposition, which said that the
premier had responsibility for the gaffe by Health
Minister Hakuo Yanagisawa. "If the remarks are true,
they are unforgivable, not as a politician but as a
human being," main opposition leader Ichiro Ozawa had
said previously in a parliamentary debate. (Text &
Agencies)

Whatever Mr Yanagisawa will voice from now on will be
targeted by media and there is not much he can say.
Maybe time to reflect on this latin maxime :
"Consultor homini tempus utilissimus." (Time shall
teach you all things)
Posted by Unknown at 9:21 AM
Email ThisBlogThis!Share to TwitterShare to FacebookShare to Pinterest