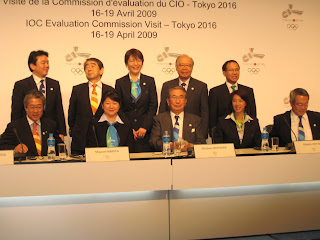 An enthusiastic super - large crowd of reporters with
a highly discernible interest attended the press event
of the IOC Evaluation Committee at the Okura hotel on
Sunday evening. Exchanges of informations and press
cards, I met Guy Drut, French athlete and IOC member
who kindly came to greet me after the event. The Gold
medalist of the 110 meters hurdles in the 1976 Olympic
Games seemed very "cordial" as usual and enthusiastic.

But my impression is that Tokyo candidature is still
very far from being won. Lots of work remain to be
achieved in explaining the importance of the Games in
and out of Japan. Equally important is the art to
describe what Tokyo would offer as a difference, as a
"bonus" to gain the 2016 Games that would be
guaranteed by the seriousness and full hearted
aspiration of Japanese organization as I saw in
covering the 1998 Nagano Winter Olympics.

So, inspectors from the International Olympic
Committee ended their tour of Tokyo on Sunday. The
city is one of several being considered for the 2016
Games. Tokyo is the only one of the candidates to
have hosted the Summer Games before. The event in
1964 helped Japan become an economic superpower, but
now in a new century, it's not the economy, but the
environment which the city is pushing

Tokyo bid has also strived to emphasize its sound
financial health. This includes a 3.7-billion-dollar
reserve for construction of venues and infrastructure
and financial guarantees from the government for what
organizers say will be the most compact and
environmentally friendly Olympics ever.

"We have been most impressed to find what Tokyo could
offer the Olympic Games," said Nawal El Moutawakel,
chairwoman of the IOC evaluation commission, at the
end of four days of briefings and site visits.

On her side sits Gilbert Feli, IOC Olympics' games
Executive Director, he answered to my question about
how relevant is the importance of the 3.1 billion
audience in Asia that would welcome the Games. "This
audience is very relevant as it was for the Beijing
2008 Olympics and we will have a technological added
value with the 2016 Games". Gilbert Felli emphasized
that the technologies developed by Japan would help
world audience to watch the games.

During this news conference the Chair Nawal El
Moutawakel thanked the Tokyo bid committee "for the
excellent and highly professional preparation,
cooperation, hard work and hospitality. We are very
impressed by the vision, the high quality of
presentation and the concept that was presented to
us," she said, but added the IOC would need to further
study the bids by Tokyo and the three other
candidates.

The IOC commission has already visited Chicago and
will tour Rio de Janeiro and Madrid in the coming
weeks. It will draw up a report a month before around
100 IOC members choose the 2016 host on October 2.
Tokyo is the only one of the candidates to have hosted
the Summer Games before, in 1964, an event which
helped it become an economic superpower.

2016, Tokyo plans to concentrate 95 percent of the
venues within eight kilometres of a 100,000-seat main
stadium to be built on a landfill. Around 70 percent
of the venues will be within a 10-minute ride of the
athletes' village. On the theme of environmental
protection, the stadium will be partly covered by a
canopy of solar power cells, while the equestrian,
rowing and cycling venues will be set on a forested
islet built on heaps of garbage.

Tokyo governor Shintaro Ishihara: "We managed to
answer very pointed questions. I think they could
understand the superb vision and concept of Tokyo's
bid."

El Moutawakel: "We have been given assurances
regarding financial aspects, which we are going to
study carefully." "We have also witnessed the support
of the business community."

The number of Japanese big business firms that support
the Tokyo bid, including airlines and sportswear
makers, has increased by six to 13 in the past week.
Financial issues have been a major concern among IOC
leaders, including president Jacques Rogge, because of
the world recession. "Although the financial
situation is a little bit difficult, I don't think
this situation will last forever," El Moutawakel said.

"You never know if other crises might happen. But we
are happy to see four of the strongest cities bidding
for the Games." Japanese Prime Minister Taro Aso has
met the IOC commission twice at a welcoming ceremony
and a dinner at the Akasaka Palace state guest house
and pledged his government's full support for Tokyo's
bid. "Foie gras" and Matsuzaka beef was on the menu
at the Akasaka Palace (State Guest House) Posh! 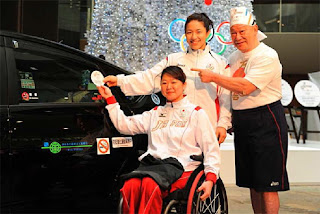 In the 2008 Beijing games, some say tarnished by the
west claims of abuses on Human Rights and on some
technological cheating, the press left the Games after
the Olympics prior to the Paralympic Games, Tokyo is
committed to the opposite, I hear, to achieve an
important event.

As a matter of fact, Narita Mayumi was sitting just
near the Tokyo Governor Ishihara (as we can see on the
picture on top of this article) to highlight the place
of handicapped people in the society, something that
deserves efforts and accuracy of urban friendly
environment for handicapped people.

Now, with only around 200 days to go before the IOC
chooses the Host City for the 2016 Olympic and
Paralympic Games, Tokyo 2016 launched a fleet of
special taxis celebrating the efficient and integrated
transport network of Japan’s vibrant capital city.
Bearing official Bid branding and messaging, the fleet
were dispatched to tell the world of Tokyo 2016’s
readiness to stage the most compact, sustainable and
environmentally-friendly Games in Olympic history.

(Reportage & agences)
Posted by Unknown at 8:39 AM
Email ThisBlogThis!Share to TwitterShare to FacebookShare to Pinterest