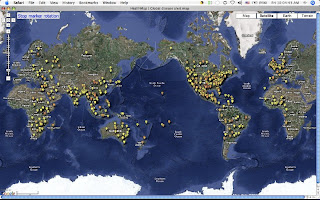 A world map of the WHO diseases outbreaks, May 1st

An exodus of people heading for their hometowns or
traveling to resorts at home and abroad for the Japan
Golden Week holiday are said to reach a peak on the
week end, overshadowed by growing concerns over the
spread of a new type of influenza. Expressways were
said to be congested across the nation from the early
saturday morning due partly to the introduction in
late March of two-year toll discounts on weekends and
national holidays.

The high school student in Yokohama who has been
admitted to a local hospital as the first suspected
case in Japan of the rapidly spreading new flu virus
tested negative Friday, the health ministry said. Test
results showed that the 17-year-old boy has been
infected only with a seasonal strain of the influenza
virus.

A detailed lab test was being conducted Friday at the
National Institute of Infectious Diseases after the
so-called PCR testing of genes conducted earlier
failed to determine whether the boy had the new strain
of flu. The boy, a second-year student at a high
school in Yokoyama's Sakae Ward, stayed in British
Columbia, Canada, on a school excursion from April 10
to 25 with 114 schoolmates and five teachers,
departing from and arriving at Narita International
Airport, according to his school. The boy has been
hospitalized in Yokohama since a preliminary test
showed he was positive for influenza A.

In between in Geneva, the WHO (OMS) World Health
Organization said Thursday it will no longer use the
term "swine flu" for the name of a new strain of
influenza A virus rapidly spreading across the world,
citing protests from pork and other farm industries.
The organization will instead use the term "influenza
A (H1N1)".

Anyhow... people still journey abroad during Golden Week...
Posted by Unknown at 9:53 AM
Email ThisBlogThis!Share to TwitterShare to FacebookShare to Pinterest