What if a U.S. president decided to pray at Hiroshima?

I worked with one of my RTL France Paris based colleagues on how to describe this hypothetical visit of USA president Barack Obama to Hiroshima in May 2016 along the Ise-Shima G7 Summit. Needless to see that Japan would not mind at all such visit, political gain naturally. It would also help reaffirming to Prime Minister Shinzo Abe Japan’s 3 non-nuclear principles. They were adopted in a parliamentary resolution in 1971 but were never adopted into real law. 3 non-nuclear principles that Mr Abe had forgotten in his successive Hiroshima speeches starting August 6, 2013. 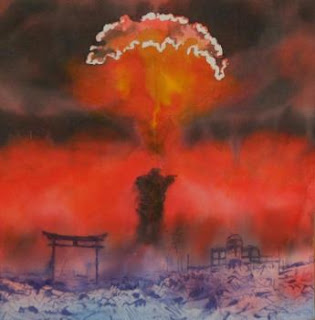 This happening of Obama going to Hiroshima, linked or not with apologies for the first atomic bombing, is very complicated option and quite tricky. If Obama goes, bows and prays, it would be seen as an act of humanity and faith in peace. If he was to choose to apologise for the killing of tens of thousands of innocent civilians, it would risk to transform into a massive disapproval of past US policies during war time. Spin doctors already are on the run and selected Hiroshima victims have been quoted as saying that they do not wish Obama apologies. There is also a risk and the risk is that it would downplay or whitewash Japan's military aggression in Asia, in Indochina, and during the war in the Pacific. Japan has a heavy responsibility but Japanese were transformed into tools of other people hegemony. Majority paid a hard price too.

That's why I recommended Paris to interview a French scholar, Franck Michelin, a rare French expert of Asian wars and world war II at Meiji University, Tokyo. Problem is if the US & Allies & Foes have to go to bow to battle fields and war zones since 19th century, historians might be embarrassed to analyse the reasons and motives why these wars were then launched. And doesn't it open the right for humanitarian and financial compensations? After all, once you apologise, creating a precedent, couldn't the victims "re-request" a "pretium doloris" the price of pain? Beyond Hiroshima and treaties. Let's imagine also Tokyo civilian population whose families were killed, burnt during March 9-10, 1945 Tokyo Bombing, boiled alive in the water of the Sumida river by incendiary napalm bombs. What if a U.S. president decided to pray at Hiroshima? What if a U.S. president say sorry for Hiroshima?

Liberation, invasion, occupation, colonisation? Are we here facing again a US G-7 politics great  scheme of communication on the theme of "Yes we can" go to Hiroshima with the risk that it will be the only agenda and minimise the rest of the G-7 summit, are we to hear true USA sense of guilt or apologies for the bombing of innocent civilians? Is it then to become, simply and naturally, the act of a simple man, watching the daily abomination of war and terrorism and saying at the end of his mandate and visiting Japan: Enough!

But it could be also much more tricky. Aren't we aiming at an offensive plan towards some Asia regional trouble makers such as paranoid North Korea dictatorship? Against a dangerous rival, China?

A bow and a pray by Nobel prize Barack Obama, the U.S. president, 71 years after, in front of Hiroshima Memorial would be most amazing political act of this early 21st century. It would shake favourably and deeply the course of our world and of our history, give courage to the Americans and allies of World War 2. No, it wouldn't be a simple visit and bow, it would generate a formidable course for peace, a powerful political impact on public sentiment and national policies.

Hiroshima was the first city ever attacked using a nuclear weapon. The explosion and then the radiation generated by the A-bomb killed 140 000 people by the end of 1945.

By the way, I read today that Nagasaki requests similar visit by Barack Obama, asking ambassador Caroline Kennedy to make it possible under the "let's make Nagasaki the last place where an atomic bomb was dropped..."

Posted by Unknown at 11:21 AM
Email ThisBlogThis!Share to TwitterShare to FacebookShare to Pinterest