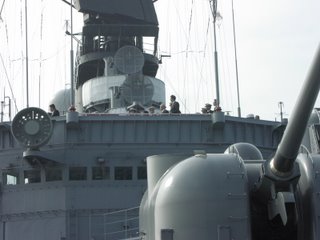 Aboard the JMSDF Kurama with Prime Minister ABE
Shinzo -- The Maritime Self Defense Force, Japan's
navy, held its annual fleet review on Sunday
October 29, 2006, with destroyers lining the seas
and missiles roaring through the air in a major
display of this country's military power. More than
8,100 troops and 48 ships -- including
Aegis-equipped destroyers and state-of-the-art
submarines -- took part in the review, which was
held in waters just south of Tokyo in Sagami Bay.

"Our country's Self-Defense Forces are being called
upon to play a more crucial and varied role," Prime
Minister Shinzo Abe said in an address to the
sailors aboard the Kurama, a destroyer that served
as flagship during the maneuvers. Abe singled out
North Korea as a major threat to Japan, saying its
recent ballistic missile test launches and its
claim to have exploded a nuclear device on Oct. 9
are "grave and unforgivable." Though planned well
before North Korea's nuclear test, Sunday's review
put the Japanese navy's best ships on display, from
vessels rigged with the advanced Aegis radar system
to new, conventionally powered submarines and
high-speed hovercraft capable of quickly putting
heavy vehicles or hundreds of troops ashore in
difficult-to-reach locations. "I believe this is an
excellent opportunity to demonstrate our
readiness," Abe, who assumed office last month,
said in his address. 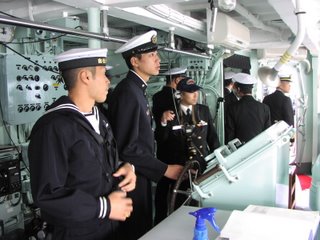 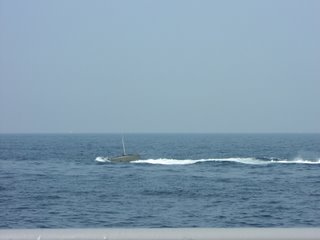 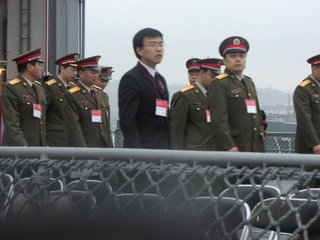 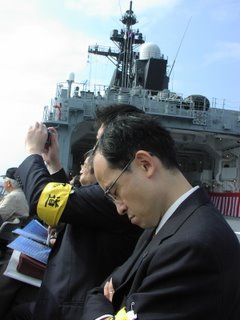 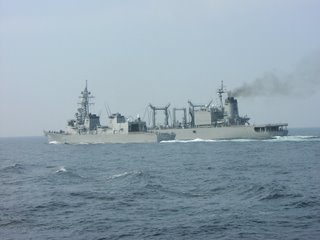 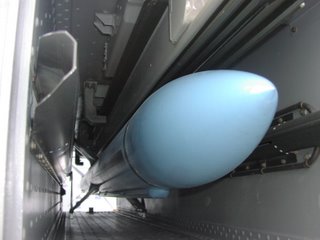 While limited by the post-World War II Constitution
to a strictly defensive role, Japan's military is
one of the largest and best equipped in the world.
Largely in response to the North Korean threat, and
concerns over the growth of China's military, it is
getting stronger. Last week, lawmakers began
discussing a plan to boost the Defense Agency to a
full-fledged ministry, giving it greater clout in
budget and policy negotiations. The transformation
is expected to come over the New Year's holidays,
though it still requires a final vote in the Diet.
Concerns over North Korea have also led Japan to
step up efforts to strengthen its missile defenses.
Japan launched its third spy satellite earlier this
year, and is rapidly moving ahead on plans to
deploy missiles around the country in an ambitious,
multibillion dollar missile shield project with the
United States. Soon after Pyongyang's nuclear test,
Japanese warships were dispatched to the Sea of
Japan to monitor activity on the Korean Peninsula.
Japan also currently has warships in the Indian
Ocean providing logistical support for coalition
forces in Afghanistan. The Diet last week approved
an extension of that mission for one more year.
(Wire news)

"... Japanese re-armament is probably the biggest
X-factor in East Asia, and one that has the
potential to make a lot of people nervous. 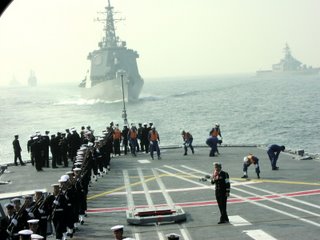 Since surrendering to the United States in 1945,
Japan has chosen to take minimal steps towards
military matters, choosing a strictly defensive
posture. In fact, their military is not a military
at all - they are referred to as self-defense
forces. Japan only spends about 1% of its Gross
Domestic Product on its self-defense forces. In
2005, this came out to roughly $42.1 billion. This
is slightly less than the United Kingdom spent in
2005 ($48.3 billion) - but the UK was spending 2.8%
of its GDP. 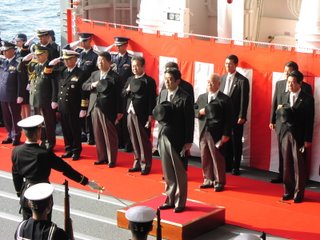 What did Japan get on this 1% approach? Arguably
the best Navy in East Asia. Japan has 40
destroyers, 18 of which have entered service since
1995, with at least two more modern vessels (of the
Atago-class) on the way. Japan has acquired eight
new submarines (the Oyashio-class), with at least
two others on the way. Japan is also building a
new class of helicopter destroyer to replace an
older class currently in service. One of the
designs for this 13,500-ton new helicopter
destroyer features a flat deck with an offset
superstructure, similar to the small "Harrier
carrier" like those used in several European
navies. 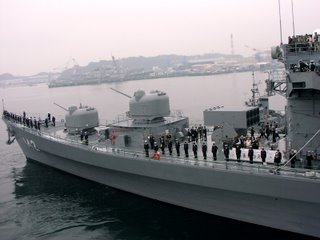 Japan's Air Self-Defense Force is also equipped
with modern aircraft. The backbone of this force
is 225 F-15J/DJ fighters, roughly the equivalent to
the F-15C Eagle, an air superiority fighter used by
the United States Air Force. Japan has designed
the F-2A/B, which is a variant of the F-16, and
currently has about 49 in service, with plans to
get up to 130. The F-2 is best described as an
F-16 that took steroids, with thirteen hardpoints
for carrying weapons to the F-16's nine, and about
50% more payload than the F-16. Japan also has 70
F-4EJ fighters in service. 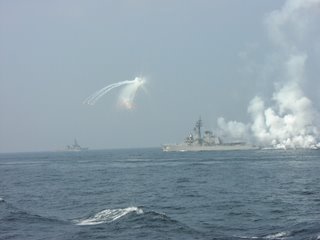 Now, imagine if Japan were to increase its defense
spending to the same level of GDP as the UK or
South Korea. That would push Japan's defense
budget to the range of $109 to $124 billion a year.
The latter figure is fifty percent larger than
China's present defense spending. If Japan went to
spending the same amount of its GDP as China did,
it would be spending $190 billion, well over twice
China's military budget. 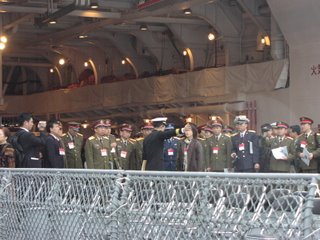 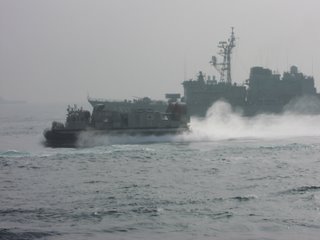 What could Japan get for that? Figure that a major
part of any Japanese buildup would be an increase
in its Maritime Self-Defense Force. What would
that increase entail? They could easily increase
the JMSDF by at least 50%, and this would largely
consist of destroyers from the Atago and Takanami
classes, the latest destroyers in service with the
JMSDF.


The JMSDF would also acquire more
Oyashio-class submarines, and the new light
carriers. Japan could even buy the F-35B (the
replacement for the AV-8B Harrier). Japan would
probably also buy more F-2s and probably also buy
the F-22. If Japan really felt they had to, they
could even develop and start deploying nuclear
weapons within six months of Prime Minister Abe
giving the order to start. 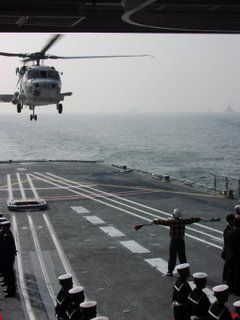 Japan has the potential to become one of the top
military powers in the world. All it really needs
to do is to make the decision. Given that in the
past ten years, East Asia has become a much
touchier and more dangerous neighborhood, that
decision may be closer than many people realize.
H. Hutchison" End of quotes


Violence and suspicion on Foreign Journalists in
Japan :

This JMSDF Navy Police man behaved with brutality
and acted in a vicious manner. His Navy Police
colleagues acted in the same way on the Kurama
admiral boat. Following, disturbing, monitoring
journalists'movements with hand guns despite we,
foreign press, are accredited on the flagship and
at the JDA, Yotsuya, Tokyo. Ndjlk : Could the
Japanese armies and security in general avoid
brutality, showing muscles, viciousness and
roughness with accredited journalists? The author
complained to the French Embassy in Japan, for the
roughness of Japan armies personal, and the embassy
investigated with regrets for the unacceptable
pressures exercised on a French press accredited
representative in Japan whose job is to report and
gather facts for his offices and audiences. The JDA
has a weak and selective memory and seems to have
forgotten my comprehensive reports on JSDF
including the interview of General Massaki ex
Chairman Joint Staff Council, Japanese Self Defence
Forces and ex minister of Defense Ohno broadcasted
in 2006 on France Television but never committed to
seriously and professionally improving the coverage
of the JDA forces for Foreign Correspondents in
Japan. _ NB : A Foreign Correspondent is a
journalist, a strange creature who asks questions
and quotes, records, films, his interviewees for
his audiences and public. He sometimes manages
foreign languages such as English in his duty. 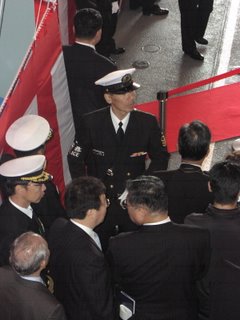 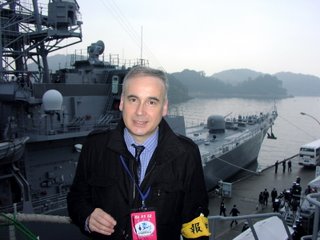 Text + Images + Quotes by Jlk Asian Gazette Blog
Posted by Unknown at 2:28 AM
Email ThisBlogThis!Share to TwitterShare to FacebookShare to Pinterest