The enigma of Japan based consumers banks! 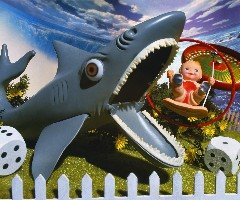 Quote : "Japan consumer credit companies in fiscal
2005 received 13.4 billion yen in life insurance
benefits taken out on customers when the cause of
death was unknown, according to results of a survey
released Friday by the Financial Services Agency. The
figure is 44% of the roughly 30 billion yen in life
insurance payouts received at the 17 moneylenders.

In agreements between consumer lenders and insurers,
death certificates are not required for payouts under
a set limit. This situation highlights the murkiness
surrounding life insurance policies taken out on
borrowers. With 14 of the firms using the same
application forms for loans and policies, there have
been claims of inadequate explanations.

The moneylenders have been criticized for using a
person's life as collateral without their knowing. On
top of this, strong-arm techniques to collect funds
have been pointed out as leading to suicides. The FSA
survey, the first on this issue, shows that the
moneylenders received around 43 billion yen, about 14%
of the total, when the cause of death was suicide."
End of quote.
Posted by Unknown at 12:49 PM
Email ThisBlogThis!Share to TwitterShare to FacebookShare to Pinterest