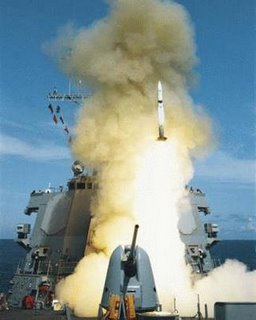 Three Japanese naval officers who swapped pornography
on their computers triggered a scandal over a possible
leak of sensitive data linked to Japan's missile
defense system, a newspaper said Thursday. Police
launched a probe last week after a navy officer
married to a Chinese woman was found to have taken
home a computer disk containing information about the
high-tech Aegis radar system, domestic media said.

Police suspect senior officers were also involved in
the swap because none of the three were authorized to
access the confidential information, the Yomiuri said.
Japan sped up the implementation of its missile
defense program after North Korea fired a volley of
ballistic missiles last year. Last Friday, its first
ground-based interceptors were trucked into Iruma air
base in Saitama prefecture, north of Tokyo, to protect
the capital.

One of the targets of the investigation is an officer
of Japan's Maritime Self Defense Force married to a
Chinese woman suspected of spying. The officer
allegedly had taken home classified information
without authority. The sailor, a petty officer, was
stationed aboard the Shirane, a destroyer.

The Asahi Shimbun newspaper too on wednesday said the
investigation was being conducted by Kanagawa
prefecture police and MSDF personnel. Officials
reported said the probe could be extended to others
for violating secrecy laws in the Japan-U.S. Mutual
Defense Assistance Agreement. Police said a hard disk
containing information on the ship and its U.S. Aegis
system were found in his home in January while police
were searching for evidence related to his wife's
alleged espionage.
Posted by Unknown at 11:09 AM
Email ThisBlogThis!Share to TwitterShare to FacebookShare to Pinterest