"I will destroy LDP..." Latest episode of Nagatacho and the City!

"Irresponsible" the powerful Keidanren shouted its stupefaction after the announcement of the sudden resignation of Yasuo Fukuda judged as senseless.

A resignation which expresses an undisputed frustration to conduct healthy politics and drives the LDP into chaos. But it was not resigning prime minister Yasuo Fukuda who said he would "destroy the LDP", it was his pre-predecessor, the flamboyant ex-ex-prime minister "Jun chan", "Lion heart" Junichiro Koizumi. He ended his 5 years term at the top of popularity and joined the rank of the famous Yasuhiro Nakasone. Both Koizumi san and Nakasone san can be credited with the quality required: "LEADERSHIP".

So who is in charge in Japan since Mr. Fukuda's downfall, seen as the erosion of the LDP's power, after he lost control of parliament's upper house in an election last year where the upper house delayed legislation and vetoed key appointments? Question is: How the LDP may find a "raison-d'etre" after 53 years of quasi undisputed reign? A record that only authoritarian countries like China or North Korea can dispute.

The best scenario, and LDP has to play the democratic way, is naturally to face the electorate. This is what the Komeito demanded since January. But the bureaucratic "calendar events" and international agenda denied this option. Too unpopular too late. Now political alternation is a risk. This is the price to pay to stimulate the archipelago at a time when economy and industry are on the slow down motion. 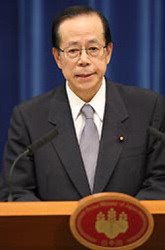 Where are we now?

It looks like we are heading towards 3 scenarios: Taro Aso, Fukuda's number 2 as secretary general of the LDP, announces election within the LDP, and advocates himself as the natural candidate; an other option is the long in queue present Construction and Transport Minister Sadakazu Tanigaki. But Koizumi's friends want to advance a woman, "there is a possibility that former LDP Secretary General Hidenao Nakagawa along with Aso's other opponents may field former Defense Minister Yuriko Koike as a candidate for the party leadership", the Mainichi writes, well versed into politics. Last option, resourceful but hard to conceive right now: the opposition and the electorate demands a general election to be set. This would be the natural democratic option in a "normal" country after such a succession of catastrophic policies. A Coup d'Etat from the militaries is not comprehensible here. This is not Thailand.

Let's see what happened tonight during this new episode of "Nagatacho and the City"... with this Q&A held at the Kantei tonight, at the prime minister house when Fukuda san announces he definitely gives up. It is 21h30 Tokyo time.

Quotes: "Media Q&A session with Prime Minister Fukuda, Courtesy of the INternet and the Mainichi Daily News. The following are excerpts from the question and answer session during a press conference held by Prime Minister Yasuo Fukuda on Monday night.

Q: When did you make up your mind to resign? You seem to be following the footsteps of former Prime Minister Shinzo Abe, who also abruptly resigned. Don't you think that your and Abe's actions will spur the public's distrust in politics?

A: Former Prime Minister Abe had health problems. I have no particular health problem other than my eyesight has become poorer. I made my decision after thinking about how the course of politics should be. As to the question of when I decided to resign, I had thought about various things before, but I made my final decision last weekend.

A: Well, I hesitate to talk about my Liberal Democratic Party (LDP), but I think a party presidential election will take place, and a newly elected party leader will be appointed as prime minister. I think things will proceed that way. This is as a result of my belief that it will surely make a difference if a new person takes over, instead of me remaining in office. I considered various scenarios and made a political decision.

Q: What did you talk about with LDP Secretary General Taro Aso when you met him for an hour today? Are you backing Aso, whom you selected for his current post?

A: I had Aso and Chief Cabinet Secretary (Nobutaka) Machimura come over, and I explained my thoughts to them; we had exchanged various opinions and taken a long time to get this point, but this is how it turned out. From this point, things are up to the LDP, but I asked Aso to go ahead and decide on the date and procedures for the party presidential election.

Q: Before arriving at your decision to resign, had you thought about dissolving the Diet for a snap election? You had difficulties implementing policies because the Upper House was controlled by the opposition. Do you have something you want to say to Democratic Party of Japan (DPJ) leader (Ichiro) Ozawa?

A: I really had a hard time because of this divided Diet. Even though I wanted to discuss various issues, many times they did not accept dialogue. They (the DPJ) flatly opposed to bills submitted by the ruling coalition, especially to important bills. On many occasions, they had no ear to listen to us. I want to say to Mr. Ozawa that I wish I could have talked with you more, in an open and frank manner, about what we should do for the sake of Japan.

Q: It is often said that during your own press conferences you seem to be talking about the affairs of another person, and we got the same impression from your press conference today. What influence will the way you resigned have on the LDP-led administration?

A: Are you talking about the LDP-Komeito coalition? It would be best if all runs smoothly, but I see in the foreseeable future the possibility that it may not go favorably. And under such circumstances, we should not get involved in unknown situations. I considered things like that. You just said I appeared to be talking about someone else's affairs, however I am able to look at myself in an objective manner. I am different from you in that respect. Please take these things into consideration."

End of quotes in (http://mdn.mainichi.jp)

Blank statement with all ingredients of the "mendokusai" societal and political guideline ("mendokusai" = it is trouble so I am reluctant to do it) On one side, the ally of Japan, the USA might have been quite frustrated to see that Tokyo remains in political deadlock for months regarding international issues that are of importance to Washington such as the updating of the military alliance and a deeper cooperation between Japan and the Americans facing the "wars on terror".

On the good side, let's give to Mr Fukuda the only success he was chosen for: Having re-established good relations with China. But his green light to hold the Parliament session for a 70 days session only from September 12th was the clear sign that, due to constitutional constrains, no major and special law would be adopted in time in such a political blockade's context imposed by the opposition, the DPJ. The DOPJ Chief, Ichiro Ozawa, opposed such laws as the refueling for the Indian Ocean and Fukuda merely satisfied the Japanese in a new counter measures plan against sky rocketing prices of commodities and of the inflation (2%). Mr. Fukuda last plan was a boosted budget to assist the economy and those who suffered the recent prices increases due to the deterioration of the American economy.

One finds one master on the way. Last option, not yet verified by commentators such as Morita Minoru: "Kitty Chan takes over Japan...!" 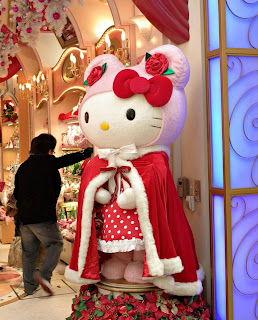 Posted by Unknown at 1:44 AM
Email ThisBlogThis!Share to TwitterShare to FacebookShare to Pinterest