Taro Aso, one of the five candidates for Japan's Liberal Democratic Party (LDP), was elected the LDP party chief on September 22, and won the premiership because of LDP's majority in parliament's Lower House. 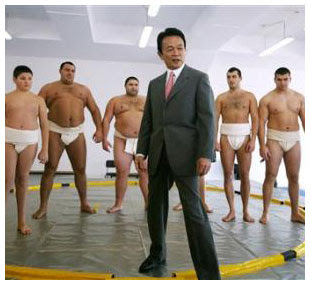 Taro Aso's imminent cabinet is seen as a "takeover cabinet for the general election" even before its birth, as no lower house (or the House of Representatives) election needs to be held until September 2009 but is likely to be held much earlier, possibly later this year. So, the political scene in Japan is now entering into an eventful period with growing attention from all sides.

It is not necessary to hurry the wagon a Nagatacho source told me. Here is the analysis of his vintage experience in Japanese politics:

Q- "What is the most pressing Diet debate agenda for your specific office?

A- It would be the issues for economic measures including tax system and financial policy. To my analysis, people interested in politics are also interested in what the country should be. Rests are just drifting among the uncertain information drained from TV."

Q- What was the debates behind the scene to have Aso san or Yosano san elected as main candidates?

A- The atmosphere in June or July were something like the followings. The major authority of LDP including major faction leaders, ex-PM, ex-director general, etc, thought LDP can not run the general election with PM Fukuda. At that time, they were targeting the X-day someday in the beginning of next ordinary session.

Q- Are we heading to a general election and if it is true, what are the schedules of coming events?

A- I think it is inevitable and I think the major new papers' analyses have the point there and are right grasping the atmosphere in the Diet. Many congressmen say: 22 is the voting day of LDP; 24 is the opening day for the session of the Diet; 27 is the day of inaugural address for the next PM; The first week of Oct would be the window LDP would submit the plan for the supplementary budget. X day would be someday during the second week; Someday during the fourth week would be the day for the official announcement of the voting day, that would be someday during the second week or third week of Nov.

Q- Is there a real option of LDP loosing the election and is there a n option of realignment between LDP and DPJ?

A- Yes, I think. Many general people in our constituency think LDP would not come up to their expectations but they also think DPJ does not have any experience as well as ability to handle the administration. Many think it would be time to give just a chance to DPJ and see what happens. About the realignment, many LDP congressmen feel it would have to be realigned when think of the political stability but many also think the great and simple coalition with DPJ should not be the option.

Q- Do you think there was a disagreement from the USA regarding the delay in implementing the parliament debates about refueling for the Indian ocean?

A- Unofficially speaking, of course it would be a disagreement. But I do not think it makes a big problem for Japan and U.S. alliance, since Japan is doing the refueling program not because of the Japan-U.S. relation and U.S is not pushing Japan to continue refueling program for their own interest.

*"The basic idea is to match" is a commentary made on 20th by a senior politician close to Taro Aso. 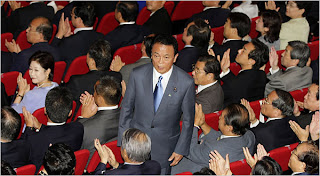 Posted by Unknown at 7:51 PM
Email ThisBlogThis!Share to TwitterShare to FacebookShare to Pinterest