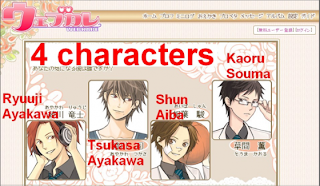 "Bye bye love, bye bye happiness, hello loneliness I think I am gonna' die..." You know the song from Paul Simon and Art Garfunkel. Here is a virtual thrill for young Japanese women who do not marry, who do not want boyfriends, who like expensive clothes and posh journeys around the world, but who remain kids, who do not want kids and who would only devote their feelings to their dog. But then loneliness 2.0 came in their life. No problem with a call at midnight to his house. Just switch on your personal computer. Weird or the continuity exclusion in the manga freaks society?

In Japan, girls are crazy over virtual boyfriends. Webkare (Web Boyfriend in Japanese), a mix between a social network and dating simulation site, is Nippon’s newest web sensation. Geared exclusively towards girls, the site attracted over 10,000 members just 5 days after its release on September 10, racking up 3.5 million page views in the same time frame.

The site is a huge hit over here. Girls sign up and become members of a social network but also users of a dating simulation in cartoon style. They have to try to hook up with one of four male Anime characters (who are the “stars” of the site) through “conversations” and must collaborate with other Webkare members in order to move on in the game. Eventually they conquer the heart of the chosen cartoon boy.

It’s pretty weird but clever. Dating simulations have been popular in Japan for quite a while now, but Webkare marks the first time the concept has been brought online and combined with social networking functionality.

Click the title to enter Webkare
Posted by Unknown at 11:47 PM
Email ThisBlogThis!Share to TwitterShare to FacebookShare to Pinterest