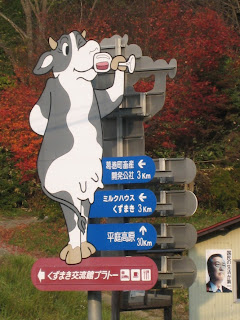 Kenji Miyazawa, a poet, novelist, and amateur astronomer, in the early Showa Period, moved with his family to Iwate. Regarded by proud residents of Tokyo as an impoverished place. Born into the family of a pawnbroker, he was greatly disturbed by the thought that his family's affluent lifestyle was supported by squeezing what little extra the poor in the area managed to put aside. 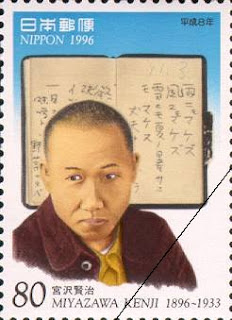 This and his strong Buddhist faith drove Kenji to spend most of his brief life in a passionate struggle to improve the lot of the poor farmers there. In the midst of his endeavors Kenji found time to avidly absorb the latest scientific, philosophic, and artistic developments that were emanating from Europe at the time (1910-1920).

Just as Japan was embarking on her rapid journey toward modernization, Miyazawa Kenji was busy putting down deeper roots in the remote rural setting from which he created a wealth of literature whose universality would someday touch the hearts of people all over the world.

At a time when Japan and the world's economy has completely halted its longest postwar expansion phase amid the deepening credit turmoil. It is not unreal to go and read and see what the Iwate nature blessed land can offer as inspiration sources... Here it is, I went to Iwate with Kenji Miyazawa's words in mind. "True nature of human beings can't help pondering what true goodness is. We must search for true happiness for all living creatures." The fundamental belief underlying Kenji's moral code was that all living creatures are mutually dependent, and the individual cannot attain true happiness apart from the happiness of all.


Japanese living out of cities made the right choice since Japanese cities nowadays cultivate stress and aggressive behaviors. But current situation is tough for Iwate village people. Former prime minister Koizumi and his predecessors preferred to privilege the urban dwellers and gain their easy buying votes (although quickly changeable...) and forgot the locals. Big mistake. Voters get mad, Iwate prefecture is an example where the Minshuto (The Democratic Party of Japan led by Ozawa, a child of Iwate) is rooted and offers an other image of Japan.

Words here are clear and direct:

"To combat the discrepancies and imbalance of assets, cities have to pay back to villages, they have to understand the crisis!" Says who? A small village mayor who showed to his locals that it is fair to have guts and that a region can achieve self sufficiency with a bit of hi-tech and lots of imagination! 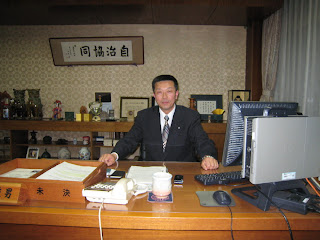 Mayor Shigeo Suzuki knows what he is talking about. He manages city affairs after being involved in the regional economical development. Population decreased to 8.000 from 16.000 in the 60's. As in many villages and regions I visited I heard the same comments from locals: There is a sense of helplessness. Still Kuzumaki prides itself with a clean energy plan that you can see anywhere in town and around, windmill, solar panels, biomass. The mountains around are peaceful and the views gorgeous, cows slowly moving on the fat grass give a sensation of a still secret treasure land. So far, tourism is successful: 500.000 visit the village to come and taste the milk and wines, excellent I can say.

Kuzumaki-machi is located at latitude 40 degrees north in the northern part of Kitagami Sanchi in Iwate Prefecture. It is surrounded by 1000m-class mountains. The town is well known as the “No.1 dairy producer in Tohoku” – 120 tons of milk per day, which amounts to food for 40,000 people on a calorie basis, are produced. To promote local development by the semi-public sector, the Kuzumaki-machi Stock breeding Development Authority is the core organization. Their activities include “calf-sitting”- taking calves from farmers and raising and caring for them, running the accommodation facility “Kuzumaki Kouryu Plateau”, and process and sell dairy products. The entire semi-public sector created jobs for 150 people and the business is making a profit. 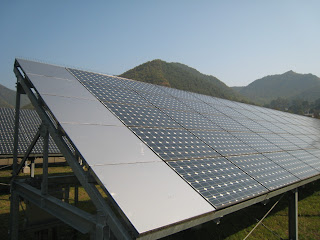 The concept of this semi-public sector is “utilize local resources” – the same concept is applied to introducing new energy to Kuzumaki. New energy such as wind generation, solar energy, biomass generation by using livestock excreta and fuel pellets made of scrap wood were all actively introduced. Together with energy saving efforts made at schools and NPOs, currently the energy self-sufficiency rate of the town is 160%. Kuzumaki is further steaming-up to develop the town by self-supplying energy.

But Mayor Suzuki does not feel the energy big companies play fair. Example. It would be appropriate if he also could fix prices. "After all, the wind that propels our windmill comes from here and it is our gold!" 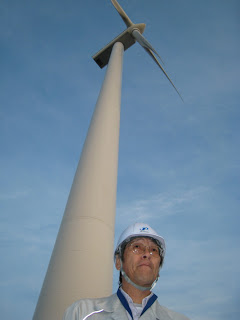 This power station was funded and built by Green Power Kuzumaki in 2003, in the Kamisodegawa district where the altitude is 1000m above sea level. 12 windmills with an output of 1,750kW each are built. The predicted yearly output is 54 million kW, which is equivalent to the electricity consumption of 16,000 households. The view from Kamisodegawa-kogen is magnificent, and could serve as a new tourism resource.

There are some issues too. There still remain vast areas in Kuzumaki to build windmills, and the private sector is also enthusiastic about this project. However, in 2003 the Special Measures Law Concerning the Use of New Energy by Electric Utilities (the RPS Law) came into force that requires electricity companies to use new energy sources at above a certain percentage but the required percentage is too low so that the law may actually be an obstacle to increasing the use of new energy. Another issue is that basically the power generated from windmills cannot be provided directly to ordinary households or companies, and the electricity must be first bought by the power companies – it is difficult for the residents to understand that the electricity they are using is provided by the local wind power generators.

Life, as it comes 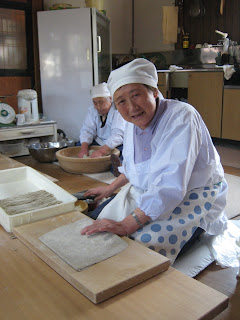 A restaurant, barbecues river fish, soba, Japanese cakes and "beignets" (I just adore them) shop opened in 1992 in the Ekarigawa district, where the income is low and one of the least developed in Kuzumaki-machi. The shop was opened by Kuzumaki-machi town officials, Mr. and Mrs. Kouke, with the hope of enlivening the local community. They are the true assets of this area. If you never saw what the Japanese sense of community is, then come around and treat yourself there. 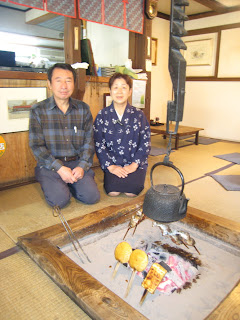 With the existing three resources, soba cultivation by utilizing intermountain natural conditions, a water-mill that has been working from the early 1900’s, and the traditional method of hand-kneading. At first, the neighbors gave a cold response saying that no one would come this deep into the mountains to eat soba and who would take the responsibility if the shop was not successful? No one approved the idea at the local meeting. Mr. and Mrs. Kouke decided to take the risk with some supporters and formed a group called “Koukeryou Suisha Kasan no kai” (Kouke watermill mother’s club), and opened the soba shop. The soba shop has prospered with 10,000 people visiting every year. Some of the group are over 70's, and if they agree life is tough, they all enjoy being together and rejoice.

Time to end the report, how could I leave Iwate without a look at the Chuson-Ji, the temple of "Center of Esteem", founded by Priest Ennin in 850. 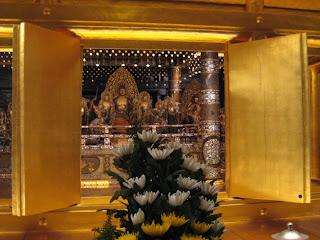 THis is a picture of the Golden Hall (Kondo) of Chusonji Temple (I did this photo and others with a special permission of the Chuson-Ji priests). A National Treasure built in 1124. Chusonji Temple stands in the town of Hiraizumi. In the 12th century, the region was a leading producer of gold and there flourished a magnificent aristocratic culture. In the late 11th century, the Fujiwara family, descendants of an offshoot of the distinguished family in Kyoto, settled in Hiraizumi and became powerful rulers of northern Japan. Magnificent place of contemplation in Chuson-Ji as the Motsu-Ji with an astonishing greenery.

I opened this page with a poet. It is said in Japan that in recent years, the number of devoted readers of Miyazawa Kenji is on the rise, no doubt reflecting a disenchantment with Japanese society that has prompted many people to search for new direction in his writings. The difficulties that Japan encounters are viewed as light compared to poor nations, but the mood of change and the dynamic of a more self sufficient nation might have found roots in this extraordinary part of the northern Japan, where tales and talents breed under the same shining sun, utilizing "local resources”.
Posted by Unknown at 11:49 AM
Email ThisBlogThis!Share to TwitterShare to FacebookShare to Pinterest