Ishihara Shintaro, a writer, a politician and a "legit" bull! 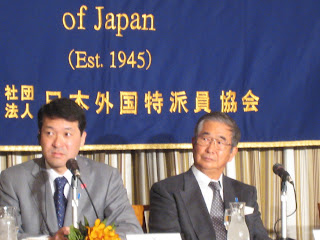 Tokyo Governor Shintaro Ishihara (R) and his colleague from Niigata, Hirohiko Izumida, listening to my question:

A full hand of curious watchers! When I arrived at the press conference at my club, there was a crowd of TVs' and microphones, photojournalists and pen writers. The attention focussed on the group of men sat on stage for what was supposed to be an outspoken event on the theme of Japanese "abductees". The people kidnapped by North Korea in the 70's from the costal area of Japan by what the Japanese press call "North Korean spies".

Spies? To kidnap Japanese from the coast? But why? To "teach North Koreans about Japanese language and customs." Excuse me if I miss something here.

But is it conceivable when one knows that hundreds of Japanese, some former Niigata residents, Koreans included, came back to North Korea answering to the call of the Pyongyang Staliniens in the same post war period? True or false? True! North Korea is reported to have confess the fact. Kim Jong Il himself pronounced the words to ex Prime Minister Junichiro Koizumi who tried in the early 2000s' to ask for their liberation. Something that did not get the approval of the US at that time. One sinister story among others is the Megumi Yokota case. A child who is said to have been kidnapped in her teens, one day on her way back home at Niigata city. Her nightmare and the hell for her parents who since then claim the case for decades. Some say, Megumi might have died in North Korea.

Therefore, needless to say that attention was hot on that Tuesday at the press club to hear the Governors whose target was to focus on US Obama elected president on this "Abductees" issue. The star of the day being the very harsh and witted Ishihara Shintaro, Governor of Tokyo. And who knows, maybe the most influential and popular politician of the Japanese right wing. Could get a seat at the top of LDP, "but I am too old for that" he said in the past. Well, who knows if he does not own the keys of the Nagatacho political game...?

Whatever. After the presentation of the conference and their speeches, when the Q&A time came. A loud silence was heard. Lots of people seemed to be rebutted by Tokyo's governor Shintaro Ishihara presence. Reason is that he is known to answer very harshly to journalists.

No surprise! Just a few rare hands including mine were raised to confront Shintaro Ishihara, like an oral contest event. When my turn to ask came, I expressed my surprise to the Governors and especially to Governor Ishihara Shintaro to see that Japan's Constitution or supreme laws do not even have the slightest concept of emergency should the archipelago be victim of an inner or outside threat, a pandemic or a war. Therefore any action Japan could undertake to protect herself is pure wishful thinking.

And this is when all started: Tokyo 's Governor launched his favorite rhetoric: Brilliantly and endlessly.

"I think China's integration of North Korea would be the easiest solution, even for the United States. I suspect an underlying motive along this line already exists," Ishihara told me. "I wouldn't imagine that China would refuse the idea."

Ishihara acknowledged that the idea would "probably" meet opposition in South Korea, which maintains hope of reunification with its communist neighbor after six decades divided by the Cold War's last frontier.

Ishihara often provoked anger and controversy with hawkish remarks, and said that "the six-way talks spearheaded by the United States had made little progress in ending North Korea's nuclear weapons drive or integrating it into the world."

This is a complicated issue because Koreans historically fought Chinese influence over the peninsula. Both Seoul and Pyongyang were angered several years ago when Beijing appeared to deny that parts of northeastern China were originally a Korean kingdom.

But Ishihara said that Seoul would benefit if North Korea became part of China. "If South Korea agrees to the idea, I think that country (North Korea) would collapse naturally and it would bring back a civil society instead of just dictatorship."

Here it was at that moment! I got my news all right on the record! It became a headline all around the world and Pyongyang reacted violently with a Dinosauric answer about Japanese society.

Ishihara and the governors said they would lobby the Japanese government to do more to break a deadlock in a North Korean plan to reinvestigate the kidnappings. Here it was. Ishihara, aged: 76, acclaimed novelist turned popular three-term governor of the world's biggest city, certainly get accustomed to confront the press since he wrote a famous book with Sony president Morita in the 90's about a Japan who can say No!
Posted by Unknown at 10:14 PM
Email ThisBlogThis!Share to TwitterShare to FacebookShare to Pinterest