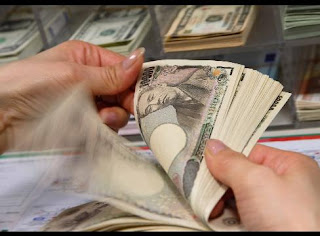 With the financial crisis in every eye, Japan spreads its financial power around the world. Difficult to evaluate the future strength that Japan is to use for its global financial dominance, but under Shoichi Nakagawa, the Minister of Finance, "Tokyo lost its low profile held since the late 90's and enter into a centripetal motion which will change the archipelago more than it ever did under Junichiro Koizumi", one can hear in Nagatacho (Diet of Japan)

Who ever gets the next Prime Minister Chair...?

After the first analysis made in autumn, based on summaries presented since 2007 according to my own sources, Japan’s biggest financial firms are seeking to expand abroad after buying stakes last year in overseas banks and brokerages that were forced to raise capital after posting losses related to the collapse of the U.S. subprime-mortgage market. Mitsubishi UFJ Financial Group Inc., the largest Japanese bank, bought a $9 billion stake in Morgan Stanley. Mizuho Financial Group Inc., the second-biggest lender by revenue, invested $1.2 billion in Merrill Lynch & Co. last January.

How interesting this document in two part about how Mitsubishi UFJ Bank bailed out Morgan Stanley. It is on the Mainichi shimbun site. Bi lingual English and Japanese.
Worth reading the process of the negotiations.

On Oct. 13, 2008, an approximately 9-billion dollar investment deal by Mitsubishi UFJ Financial Group's (MUFG) in U.S. financial giant Morgan Stanley came into effect. But behind this arrangement -- which helped bolster a market nearing collapse from a once-in-a-century financial crisis -- was an unprecedented level of involvement of the Japanese and U.S. governments.

In the following the interaction of both corporations with both different corporation cultures... until the clash comes, critics say.

"The U.S. government, in cooperation with the Japanese government, worked furiously from the close of the G7 meeting on Oct. 10, 2008 to the morning of Oct. 13, in order to secure vast sums of investments from Japanese banks to shore up the global financial system. For some time previously, however, the Federal Reserve Board (FRB) had already been pushing for increased foreign investment in the U.S. financial sector."

Click the title to read the series.
Posted by Unknown at 7:32 PM
Email ThisBlogThis!Share to TwitterShare to FacebookShare to Pinterest