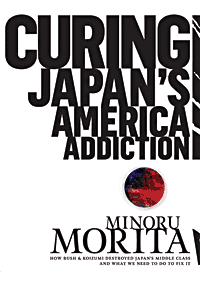 This book is for sale on Amazon: We had Mr. Morita at the press club in July 2008 for an interesting event recorded.
"Long considered one of Japan's leading political analysts, Minoru Morita's first book translated into English makes no bones about its premise -- that the Koizumi Cabinet, and its ties to the Bush Administration, have destroyed the nation's middle class. Morita says tensions between the countries are growing, and the book was translated into English so that Americans would better understand Japan's political situation.

The 75-year-old author says in the book's first sentence that Japan is on the verge of its greatest political crisis in history. With a general election coming within a year and support for the Fukuda Cabinet still low, make your reservations early as the veteran Nagatacho-watcher predicts how the saga will play out."

Some statements from Mr. Morita:

~ "The Government Japan Needs: It is time for a democratically inclined administration that puts priority on the people and our national interest"

~ "Japan must revive its brand of democratic capitalism. Citizens must recover their basic human rights. The Bush administration has made the majority of us unhappy with its beautiful sounding neoliberal globalism a series of structural reforms that bring us market fundamentalism, small government, deregulation and less social welfare. Neoliberal globalism brings misery to the people while also destroying capitalism. The downfall of Lehman Brothers points to the defeat of neoliberalism. We must turn from the reckless course neoliberalism has put us on. To do that, we need to resuscitate our democracy."

~ "I am also worried about the way the world is turning recently. Japanese politicians are looking inward now, and that's a dangerous stance to take. Instead, Japan should be forwarding peace initiatives."

~ "If the Americans can expand the war, they may be able to dissipate the growing sense of unease and economic gloom at home, but that sort of move will only deepen the dangers we face. The cracks that have begun to show in American society will spread. This is quite a dangerous situation. Japanese politicians are not even considering the appropriate international stance. They are shut down. This also is worrisome."

(This note was updated mid-January)
Posted by Unknown at 9:53 AM
Email ThisBlogThis!Share to TwitterShare to FacebookShare to Pinterest