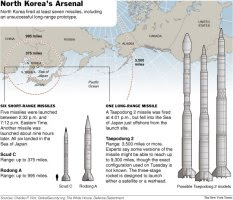 Everybody is waiting for North Korea launching of a
rocket, and according to the Sankei shimbun:

"The Defense Ministry has now begun studying
plans to mobilize the Self-Defense Forces'
missile defense (MD) system and intercept an
advanced model of the Taepodong 2, a North Korean
long-range ballistic missile, should North Korea
launch the missile at Japan, sources said
yesterday. Intercepting it would be the Standard
Missile 3 (SM-3), a sea-based intercept missile
mounted on Aegis-equipped destroyers, and the
Patriot Advanced Capability 3 (PAC-3), a
land-based ground-to-air guided missile. The MD
system would be actually used for the first time
since its introduction. However, intercepting
requires a grave political decision. The Defense
Ministry will therefore coordinate carefully with
the prime minister's office.

To intercept the enhanced Taepodong-2 missile,
the government will for the first time invoke an
action, newly stipulated in the SDF law with the
MD system being introduced, to destroy ballistic
missiles and other projectiles.

The action for missile destruction is to be taken
in two cases: 1) if there are such pre-launch
signs as fuel injection, the defense minister,
with the prime minister's approval, will order
the SDF to intercept; and 2) when it is necessary
to watch out for missile testing or other
eventualities even though there are no definite
signs, the defense minister will have Aegis
vessels and other SDF systems prepositioned to
intercept in conformity with a prepared outline
of countermeasures for emergencies."

"Iran and North Korea have been cooperating with
each other as Iranian nuclear development
researchers have visited North Korea and North
Korea has sold missile-related parts to Iran.
Iran has denied the existence of any military
relations with North Korea. However, the two
countries' technical cooperation has been
continuing behind the scenes. Their
nuclear-related technologies might have improved
markedly."

If such a policy was to be adopted it would mark
a radical change with Japan 's former posture
that was to avoid interception of a DPRK rocket
missile flying above Japan's archipelago. The
Sankei often well informed also has a reputation
to put oil on fire regarding the dramatic events
on the Korean peninsula while Japan allies often
wondered about Tokyo if such a rocket was to be
used as a deterrence by the North.
Posted by Unknown at 11:01 AM
Email ThisBlogThis!Share to TwitterShare to FacebookShare to Pinterest