From "international peace cooperation activities" as
conducted in Cambodia or Africa in the 90's to near
war scenario and military operations today. Japan
stretches the Fundamental Law to fit military options.
One step to enforce the fundamental mission of the
JSDF means that for the first time in its history the
JSDF's core purpose necessarily involves missions
outside of Japan. 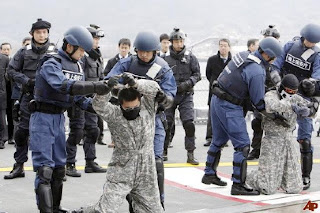 The JMSDF special units such as the SBU and Coast
Guards officers will be part of the forces sent to
combat pirates in the Horn of Africa by Japan. First
policing action abroad since World War II for Japan's
Self-Defense Forces, with the dispatch of Maritime
Self-Defense Force destroyers on an anti-piracy mission
off the coast of Somalia, whose major missions
overseas have so far been largely rear-area support,
such as refueling, transportation and reconstruction
missions. 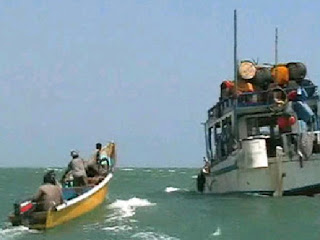 The Japanese Maritime Self-Defense Force (JMSDF) and
the Japanese government face legal problems on how to
handle attacks by pirates against ships that either
have Japanese personnel, cargo or are under foreign
control instead of being under Japanese control as
current Constitution Article 9 regulations would hamper
their actions when deployed to Somalia. 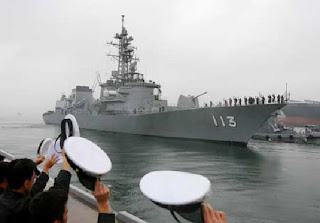 The Sazanami a Takanami class destroyer with a Mk-48
Vertical Launch System.

On February 4, 2009, the JMSDF sent a fact-finding
mission led by Gen Nakatani to the horn of Africa
region prior to the deployment of the Murasame-class
destroyer JDS DD-106 Samidare and the Takanami-class
destroyer JDS DD-113 Sazanami to the coast of Somalia.
Both JMSDF vessels are units of the 8th Escort
Division of the 4th Escort Flotilla based in Kure,
Hiroshima Prefecture.

Order based on the law's Article 82, which stipulates
that the SDF may take necessary actions at sea to
safeguard Japanese lives and property in situations
that exceed the capacity of the Japan Coast Guard.
Simultaneously a bill will enable the deployment of
the SDF abroad as needed to deal with pirate attacks
on the high seas. 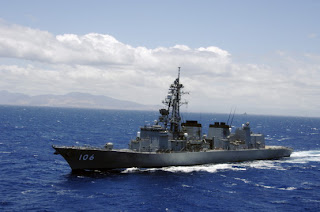 Once the order is given, two destroyers, the 4,650-ton
Sazanami and 4,550-ton Samidare of the 8th Escort
Division of the 4th Escort Flotilla, are to leave
their base in Kure, Hiroshima Prefecture, on Saturday
afternoon.

A total of roughly 400 MSDF personnel and eight coast
guard officers will board the ships, each to carry
onboard two SH-60K patrol helicopters and two
speedboats, according to the Defense Ministry.
Members of the commando-style MSDF Special Boarding
Unit will also board the ships to deal with encounters
with Somali pirates, who are said to be armed with
such weapons as rockets and automatic rifles.

The fleet is expected to take two to three weeks to
arrive in the gulf, making it likely that the escort
mission will begin around early April. The destroyers
will escort Japan-linked ships, Japanese registered
ships, foreign ships with Japanese nationals or
shipments on board, and other ships operated by
Japanese shipping firms.

Coast guard officers will be at hand aboard the
destroyers to process judicial matters, including
collecting criminal evidence and handling crime
suspects, in case the destroyers run into pirates. In
such encounters, MSDF personnel may fire warning shots
to ward off pirates. But under the maritime policing
provision, they cannot harm the bandits except under
limited circumstances, such as for self- defense.
Japan also plans to deploy MSDF P-3C patrol aircraft
to the gulf in several months to watch over the vast
sea.

More than a dozen countries, including Russia, China,
the US and the European Union have deployed their
naval vessels to waters around the Horn of Africa on
anti-piracy missions under the authority of U.N.
Security Council resolutions. Piracy has been rampant
in the waters, accounting for 111 cases last year, or
more than double the cases reported a year earlier.
That accounted for roughly one-third of all pirate
incidents in the world.

The Special Boarding Unit is a special forces unit
established by the Japanese Maritime Self-Defense
Forces on March 27, 2001 in response to a previous spy
ship incursion that occurred on the Noto Peninsula in
1999. The unit was created to perform similar roles to
those undertaken by French GIGN or American Navy SEALs
and the British SBS. Their field involves maritime
anti-terrorist duties, including operations where arms
are known to be involved. However, their duties and
responsibilities overlap with those of the Special
Security Team, the Japan Coast Guard's counter
terrorist unit. SBU is a special forces unit and
highly classified subject and opacity surrounds their
role in case of combat with pirates.
Posted by Unknown at 9:18 AM
Email ThisBlogThis!Share to TwitterShare to FacebookShare to Pinterest