"In the Chinese Navy"... a new power player on high seas

"China’s long standing land based survival strategy is
likely to become history soon." 'The Chinese Navy’s
decision to send warships to the Somalia coast last
January, soon after UN Resolution 1851 on 16 December
2008, coincided with its first public confirmation, on
24 December 2008, that it was “seriously considering”
building an aircraft carrier. 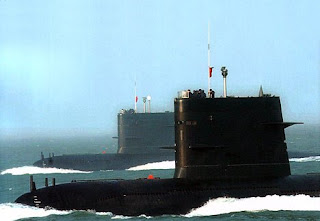 These announcements reflect the Asian giant’s growing
interest in the maritime domain. Despite a coastline
stretching approximately 14,500km in length, China has
traditionally focused on inland security.

China’s recognition of its need to have a far-reaching
maritime sphere stems from its decision to protect its
interests as well as its desire to seek great power
status.

For Beijing, (as for Tokyo) protecting the sea line of
communication (SLOC) is essential as China is the
world’s second-largest oil consumer and the
third-largest importer.

These announcements reflect the Asian giant’s growing
interest in the maritime domain. Despite a coastline
stretching approximately 14,500km in length, China has
traditionally focused on inland security.

Among the Asian Navies, the Chinese Navy has the most
powerful submarine-fleet. According to the Military
Balance 2008, China has about 70 submarines including
three ballistic-missile submarines (SSBN) which are
involved in conducting frequent patrols far from the
mainland.'

The intelligence naval battles intensifies in China
seas between China and the USA, as with Russia and
Japan, rising tension, implicating frequent hide and
seek dangerous naval games.

News media reported half a dozen incidents just within
the past week in which U.S. surveillance vessels were
monitored in Asia waters including dozens of Chinese
Y-12 maritime surveillance aircraft and on Sunday the
US MoD (Pentagon) stated that five Chinese vessels had
blocked and surrounded the U.S. surveillance ship,
Impeccable, in Asia international waters. One of the
ships came within 25 feet of the U.S. boat, according
to the Pentagon.

China criticized the United States on Tuesday, blaming
a U.S. Navy ship for violating international law
during a tense confrontation near a Chinese submarine
base. 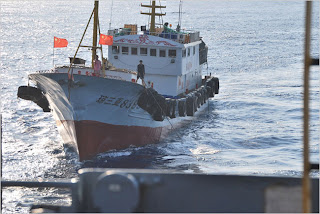 A Chinese sailor used a long grappling hook to try to
snag a cable that the Impeccable was using to tow an
underwater listening device known as a Surtass array.

“The U.S. claims are gravely in contravention of the
facts and confuse black and white, and they are
totally unacceptable to China,” said Ma Zhaoxu, a
Foreign Ministry spokesman.

The latest incident allegedly occurred in the Asia
international waters only 75 miles south of a naval
base near Yulin on Hainan Island from where China has
started operating new nuclear attack and ballistic
missile submarines. 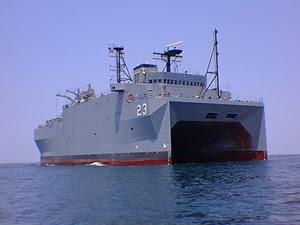 The U.S. Navy on its part is collecting data on the
Chinese submarines and seafloor to improve its ability
to detect the submarines in peacetime and more
efficiently hunt them in case of war.

Such case with the USNS Impeccable which is equipped
with the Surveillance Towed Array Sensor System
(SURTASS), a passive linear underwater surveillance
array attached to a tow cable. 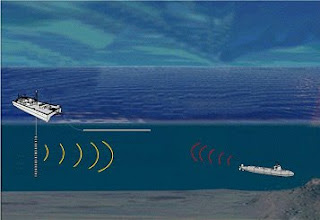 SURTASS was developed as a floating submarine
detection system for deep waters, and the Navy wants
to add an active Low Frequency Array (LFA) to improve
long-range detection of submarines in shallow waters.

Among Chinese submarines the USNS Impeccable was
monitoring is "probably the Shang-class (Type-093)
nuclear-powered attack submarine", a new class China
is building to replace the old Han-class, and which
has recently been seen at the Yulin base, according to
the FAS quotes. 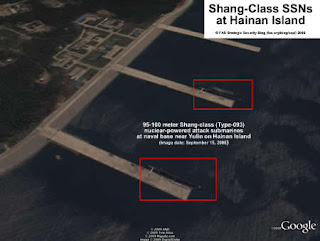 The Impeccable incident came just a week after the two
countries resumed high-level talks between their
militaries. The dialogue had been broken off last
year by the Chinese over a $6.5 billion American arms
deal with Taiwan.

The dispute also comes in the wake of a recent visit
to China by Secretary of State Hillary Clinton. Her
recent visit in Beijing was part of a tour of the
Asia-Pacific region, including Japan and Indonesia in
her first overseas trip for President Obama’s
administration.

And just after Mrs. Clinton left China, the State
Department angered Beijing with a broad set of
criticisms of its human rights record in 2008.
Followed by criticism on trade issues between the US
and China...

I am heading soon to the strategic islands of Okinawa
to have a look at these dangerous naval games with an
"Umi no Kuni" viewpoint angle.

Posted by Unknown at 8:14 AM
Email ThisBlogThis!Share to TwitterShare to FacebookShare to Pinterest