A day in Tokyo with i-MiEV "Green" car! 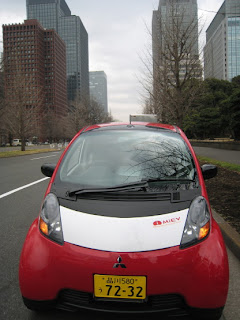 Mitsubishi Motors Corporation will work with PSA
Peugeot-Citroen on its new electric car, the i MiEV,
aiming to sell the car in Europe from the end of 2010
or early 2011. Peugeot will sell the car under its
own brand.

I want to hear more about it. And contrary to what one
can read, hear or see on TV, Japanese Executives ARE
opened to press interviews. Yes they are. They do it
all the time.

If you want one with one of Toyota, Nissan, or
Mitsubishi Presidents, just email me and I will give
you a number. Actually Japan is one of the rare
country where we can interview any VIP in any activity
and I already met the president of Nissan Renault,
Toyota, Mitsubishi and others several times and in
several occasions. How? Japan has its rules, it is
necessary to take an appointment first... instead of
running to the factory door and wait like the singing
bird that the door opens.

So many catastrophe scenario! Car industry reality is
currently dull but lots remain to be understood about
how the car industry is already engaged into a revival
plan through the new technologies and friendly use. It
will take time but solutions are right ahead.

Today Japanese car industry already is focussing on new
engines and new models for Green cars, trucks, lorries,
and City buses. Less energy consuming, friendly to
the environment. Question is : why they did not think
about it before? Besides, it is so quiet!

New synergies are considered about batteries. By the
way, is a car battery part of the vehicle or part of
the fuel service...? 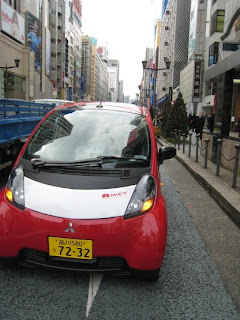 Following is an extract of an article on Japanese
automobile industries published in renown Ward's Auto
review from the USA. Interview of the top man of
Mitsubishi Motors Corporation: President Osamu Masuko
who confirms that "Mitsubishi remains committed to
electric vehicles. In July, it will launch the i-MiEV
in the Japanese market. By year-end, it will begin
exporting the car to right-hand-drive markets and then
in 2010 begin shipping left-hand-drive vehicles."

"Mitsubishi Motors Corp. President Osamu Masuko is
hoping to work his magic a second time. Having
engineered a dramatic reversal of the auto maker’s
fortunes after assuming the presidency in January
2005, the 60-year-old Masuko now faces what could be
an even greater challenge as the global economy sinks
deeper into a protracted recession. After reporting
record earnings of ¥108.6 billion ($1.2 billion) in
fiscal 2007, Mitsubishi is targeting a slim operating
profit of ¥5.5 billion ($55 million) in the fiscal
year ending March 31. Second-half fiscal year losses
are projected at ¥20.4 billion ($224 million).

MMC’s Masuko perplexed over the yen’s sharp
appreciation against most major currencies. Analysts
remain skeptical about Mitsubishi’s prospects, with
many seeing the auto maker as too small to be a global
player; too dependent on exports from Japan; and too
vulnerable to exchange-rate fluctuations, with a solid
but thin model lineup. Yet, projected losses for the
second half of the current fiscal year are
substantially lower than most of its Japanese rivals,
and the auto maker holds ¥257.9 billion ($2.8 billion)
in cash, enough, it believes, to weather the current
downturn. More relevantly, Masuko is confident
Mitsubishi, which sold nearly 1.4 million vehicles in
fiscal 2007, can lower its break-even point to
slightly below 1 million units on an annual basis by
second-half fiscal 2009, after reducing swollen
inventories during the first part of the year." 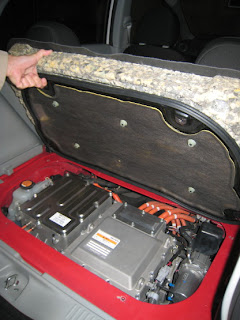 "Ward’s: Will Mitsubishi change its product focus and
brand concept away from sporty and fun to drive in
light of growing demand for smaller, more
fuel-efficient cars?

Masuko: To some extent we have no choice, as
consumers, as you alluded, have become more aware of
environmental issues than in the past. Thus, we will
introduce a global small car with a 1.0L engine in
2011. In July, we will launch the i-MiEV in Japan and
begin exporting the car by year-end. Then in early
2010, we will launch a compact SUV. While we roll out
these new models, other vehicles in our lineup will
undergo periodic facelifts and minor changes.

Ward’s: Does Mitsubishi have any plans to produce a
hybrid or plug-in hybrid?

Masuko: In fact, we now plan to develop a plug-in
hybrid and hope to announce something in the near
future. Basically, our strategy will be to adopt
batteries for small cars like the i-MiEV and plug-in
hybrid technology for larger vehicles." 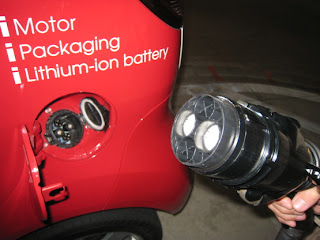 "Ward’s: Some analysts suggest Mitsubishi needs to
find a new partner if it hopes to survive the current
environment. Do you agree?

Masuko: As I’ve said many times before, the era of big
alliances – what I call the 4 Million Club – is over.
At least for Mitsubishi, there will be no more Daimler
Chrysler (AG)-type alliances. That said, we will
cooperate with other auto makers and suppliers on
platforms or technologies. Some examples: Last June,
we entered into a technical collaboration with PSA
Peugeot Citroen to work together in the field of
electric power-trains. PSA has sold more than 10,000
electric vehicles. Also with PSA, we are building an
assembly plant in Kaluga, southwest of Moscow, to
jointly produce a C-segment car from 2011.

Earlier, we entered into an OEM supply agreement with
PSA, whereby Mitsubishi supplies Outlander CUVs, both
Peugeot- and Citroen-badged, and they supply 2.2L
diesels for those vehicles. This past December, we
announced a joint project with Proton (Holdings,
Malaysia’s largest auto maker) to help develop a new
jointly badged car that Proton will then produce. And
in March, we will open our joint venture lithium
battery plant with GS Yuasa. This is the sort of
thing I have in mind." 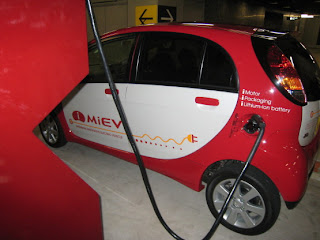 Simple, I guess it is time to plug-in!

(Courtesy of the author)
Posted by Unknown at 8:29 AM
Email ThisBlogThis!Share to TwitterShare to FacebookShare to Pinterest