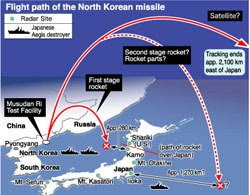 North Korea's launch of an "artificial satellite," as
claimed by Pyongyang, has ended in failure since the
second and third-stages of the missile plunged into
the Pacific Ocean, according to U.S. forces.

North Korea's missile launch leaves plenty of
questions unanswered, as the Mainichi shimbun writes
today (click the title to access the report). One
questions is that it took time for the Japanese and
their US allies' authorities to detect the rocket and
inform the population. Therefore announcements to
protect citizens came too late when the missile
already was flying above Japan's territory. What
could happen if next time is a real technical hazard or
a nuke payload?

"When the missile's path was calculated, it turned
highly likely that the missile was flying at an
altitude beyond the firing range of the SM-3
interceptor missile (less than 300 kilometers), and
the missile was certain to fly over Japan," said a
senior Defense Ministry official. The point where the
missile was estimated to fall was also outside
Japanese territory. The missile's path was beyond the
range of the PAC-3 interceptor missiles (a radius of
about 20 kilometers) deployed at the SDF's two
exercise sites in Akita and Iwate prefectures."

Rather than a nuke bomb, Japan could well received
debris on the head as DPRK technology seems immature.
Therefore, further Self Defense plans required.

Defense Ministry: "the flight course of the latest
missile is almost the same as that of the Taepodong-1
that was launched back in 1998 but this time it veered
further south. The course this time is to the east of
North Korea, which is an appropriate direction for the
country to launch an artificial satellite, but at the
same time, Hawaii and ultimately the U.S. mainland
also lie in this direction. The firing of the missile
will no doubt lead to a strong reaction from
Washington, which is wary of the development of
long-range ballistic missiles that are capable of
reaching the U.S. mainland."

"A satellite launch requires a complicated system.
North Korea's technology is only a patchwork of
individual established technologies including that of
the former Soviet Union's Scud missiles, and North
Korea apparently failed to integrate them as a new
system."
Shinya Matsuura, specialist in space development.

Kyodo News A Defense Ministry official jumped off a
headquarters building in Shinjuku Ward, Tokyo, in an
apparent suicide Monday morning, the ministry said. A
member of the Air Staff Office, the official started
working at the ministry Wednesday, the ministry said,
adding he was not involved in the false alarm Saturday
over North Korea's rocket launch.

Maybe not good timing to irritate the DPRK for the 6
party talks anyway, slow though that may be.
Posted by Unknown at 9:31 AM
Email ThisBlogThis!Share to TwitterShare to FacebookShare to Pinterest