Governor Ishihara Shintaro: Olympic 2016 Tokyo is better qualified than any other city! 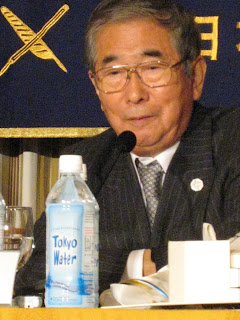 Tokyo Gov. Shintaro Ishihara believes that the Japanese capital is the most appropriate to host the 2016 Summer Olympic Games because of its long commitment to peace.

He also said interesting things in these days of financial constraint: Asking to a Foreign Correspondent in Tokyo what Japan should do to avoid financial difficulties, the veteran journalist tells: "Japan should stop buying American treasury notes". Governor Ishihara answered "we do not need to buy American bonds." (Watch the Youtube segment clicking the title of this posted report)

[Recorded at the FCCJ, Tokyo, during a press luncheon where other topics were discussed such as Tokyo bid for 2016 Olympics.]

"The Olympics are the world's biggest event aimed at promoting peace and harmony for all humankind. In that sense, Tokyo is better qualified than any other city," Ishihara said in a press conference on Wednesday in Tokyo hosted by the Foreign Correspondents' Club of Japan. As for the threat to its financial state, Japan's capital has the central government's guarantee to finance Tokyo Games. That is an important IOC precondition, but Ishihara said that Tokyo currently sees no need to make use of it.

Known for his radical nationalist view, Ishihara shrugged off the recent threat posed by North Korea's launch of what it claimed to be a satellite rocket. "I think there was too much fuss raised on this issue," the governor said.

He does not believe Pyongyang's act would be a threat to hosting the Olympic Games or to the safety of the people with the level of military technology that the Stalinist state may possess, he said. Ishihara referred to the reports from the United States and South Korea that no satellite was confirmed in the orbit.

Even if its technological development was more advanced, North Korea would not be able to make use of it because it would face retaliation. "They (North Korea) can't execute that technology," Ishihara said. "So how could that be the threat to Japan? The main purpose of North Korea was to restore the bilateral dialogue with the United States. There is no other motive." He also stated that he does not believe that the US would spend blood to defend Japan in case of serious emergency in spite of the US Japan military treaty.
Posted by Unknown at 12:45 PM
Email ThisBlogThis!Share to TwitterShare to FacebookShare to Pinterest