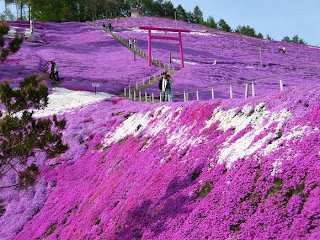 "First day of spring
I keep thinking about
the end of autumn."
"Now the swinging bridge
Is quieted with creepers
Like our tendrilled life"
Tsutsuji hill, on a sunny day of Japanese spring.
(Pic. from garden tours gallery keno2)
Matsuo Basho (1644 - 1694)
Basho (bah-shoh), pseudonym of Matsuo Munefusa (1644-94), Japanese poet, considered the finest writer of Japanese haiku during the formative years of the genre. Born into a samurai family prominent among nobility, Basho rejected that world and became a wanderer, studying Zen, history, and classical Chinese poetry, living in apparently blissful poverty under a modest patronage and from donations by his many students. From 1667 he lived in Edo (now Tokyo), where he began to compose haiku.
The structure of his haiku reflects the simplicity of his meditative life. When he felt the need for solitude, he withdrew to his basho-an, a hut made of plantain leaves (basho)- hence his pseudonym. Basho infused a mystical quality into much of his verse and attempted to express universal themes through simple natural images, from the harvest moon to the fleas in his cottage. Basho brought to haiku "the Way of Elegance" (fuga-no-michi), deepened its Zen influence, and approached poetry itself as a way of life (kado, the way of poetry) in the belief that poetry could be a source of enlightenment. "Achieve enlightenment, then return to this world of ordinary humanity," he advised. And, "Do not follow in the footsteps of the old masters, but seek what they sought." His "way of elegance" did not include the mere trappings associated with elegance; he sought the authentic vision of "the ancients." His attention to the natural world transformed this verse form from a frivolous social pastime into a major genre of Japanese poetry.
In the last ten years of his life Basho made several journeys, drawing from them more images to inspire his contemplative poetry. He also collaborated with local poets on the linked-verse forms known as renga. In addition to being the supreme artist of haiku and renga, Basho wrote haibun, brief prose-and-poetry travelogues such as Oku-no-hosomichi (The Narrow Road to the Far North; 1689), that are absolutely nonpareil in the literature of the world.
(Quotes of poetryconnection net)
Posted by Unknown at 1:19 PM
Email ThisBlogThis!Share to TwitterShare to FacebookShare to Pinterest