Kim Jong-un, profile of a dictator☢?

Mr. Kim Jong-un does not look like a dictator to come, especially after being educated in Bern (Switzerland). Or is it that Swiss banks have such a bad influence? Well... Here is what some of the reporters in Japan and Korea have to say about Kim Jong-il's offspring. 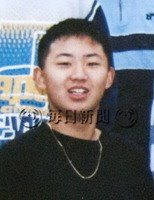 Kim Jong-un is pictured* in this June 1999 photo taken when he was a seventh grader at a Bern secondary school. (Photo taken from a group photo with his classmates) The Mainichi shimbun writes today http://tinyurl.com/ldjaor
Who exactly is Kim Jong-un, and why was he chosen to succeed Kim Jong-il? Kim Jong-il’s health problems seems to be highlighted, so questions and speculations began to arise about his successor. Kim Jong-il selected his third son, Kim Jong-un, to be his eventual heir
Here is what Ohmynews has to say:
"Believed to be around 25 years old, Jong-un was educated in Switzerland during his youth. Certain sources, including Kenji Fujimoto (Kim Jong-il’s former chef), claim that Kim Jong-un is “exactly like his father”. Fujimoto is also quoted as explaining that “If power is to be handed over then Jong-un is the best for it”. Fujimoto went on to claim that Jong-un has "superb physical gifts", drinks heavily and "never admits defeat”. Click here to access the report http://tinyurl.com/nqxonz
“When Prince Jong-un shook hands with me, he fixed me with a vicious look,” Kim Jong-il’s former Japanese sushi chef wrote in a 2003 memoir describing his first encounter with the boy, then 7, dressed in a military uniform and known as a “prince” among his father’s aides. “I still cannot forget the look in his eyes. It seemed to say: "This is a despicable Japanese." The chef, who goes by the pen name Kenji Fujimoto, said in an interview that as a teenager, Kim Jong-un was already his father’s favorite and “looked just like him.” The New York Times is quoted a saying http://tinyurl.com/l6jkwg
How can a 7 years old boy be described as having a vicious look? (ndag) Then all the tough teens I've seen in the 80's in Tiananmen, dressed like little soldiers of Mao Zedong all opted for the massacre in 89?
Now, now: Will little Kim make it with the in-laws... and with the Chinese leadership who supports North Korea's Terminator x game and plays it versus what is regarded as the rest of the humanity in the Western hemisphere?
I'll keep you posted.
*Asian Gazette does not formally identify this picture as being the kid in question. We just quote some of the Asia based reporters who say so.
Posted by Unknown at 11:39 PM
Email ThisBlogThis!Share to TwitterShare to FacebookShare to Pinterest