35,000 demonstrate against US military bases in Japan and Okinawa Island 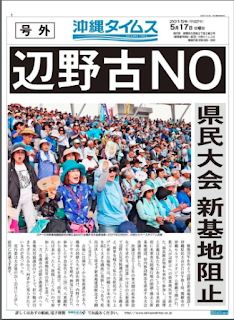 Thousands of people, 30.000 demonstrated today in Okinawa and across Japan in protest against the planned relocation of a US military base in Okinawa. The protesters criticised the Japanese government, who appear to be turning a deaf ear to the locals.

The question is asked by many commentators : "... are these US bases extended on the territory of Okinawa militarily really useful knowing how today’s war is being conducted? Shouldn't’t they be reduced and turned to the Japanese forces, proceeding with decolonization of some bases to Guam or other countries? In case of major strike, it is nuclear or submarines, drones, jets, cyber, and other technological refined weaponry paralyzing the enemy. Same goes with Tokyo, Yokosuka is understandable but is a base like Yokota air base really useful or is it for the comfort of some US forces high ranking officials and their families?" EoQ  Etc etc...

There is a long history of incidents and alleged crimes committed by US soldiers in Okinawa. The current wave of anti-base sentiment on the island was sparked by a 1995 case, when three US marines were reported to have kidnapped and brutally raped a 12-year-old schoolgirl.

The US Marine Corps’ Futenma Air Station in heavily populated Ginowan city has been a cause of tension between American troops and local residents for years. Okinawa, home to about 1 percent of Japan’s population, hosts nearly half of the 47,000 US troops based in Japan.

Tokyo authorities want to shut the base down and open a new one in the more remote town of Henoko, in the center of the southern Japanese island. But the majority of the locals, as well as Okinawa Governor Takeshi Onaga, want the construction of the replacement base to be scrapped.

We met Okinawa Governor Takeshi Onaga in Naha recently and I am happy to see that Mr Onaga confirmed he is to answer to the foreign media invitation that was extended to him.

Now in case of a major conflict, with China, with DPRK, with Russia, with x, in coming years after provocations and serious offensive recorded cases, Japanese will be delighted to have Uncle Sam near by... 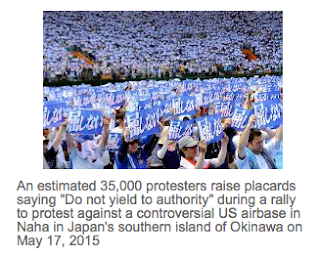 Posted by Unknown at 8:39 PM
Email ThisBlogThis!Share to TwitterShare to FacebookShare to Pinterest