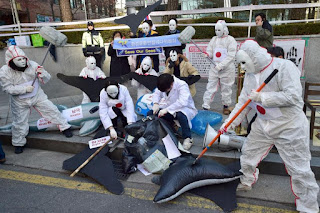 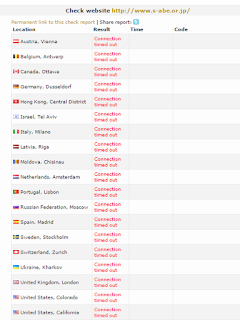 Hackers linked to Anonymous have targeted websites related to whale and dolphin hunting before, New York Times say. The group claimed responsibility last month for the shutdown of several government sites in Iceland, another nation that practices whaling. Indeed two Japanese whaling ships and 2 escort vessels departed for the Antarctic last week, "drawing condemnation from anti-whaling groups" as well as governments that oppose the practice, including those of Australia, New Zealand and the United States. 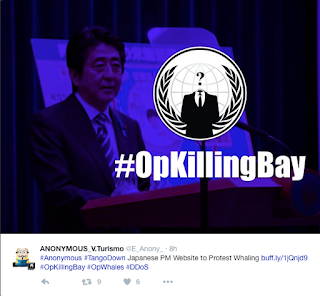 The Anonymous attack all happened after Japan launched a new counterterrorism unit "in an air of secrecy" the Mainichi quoting AP said on Tuesday, with "journalists only allowed to photograph its 24 members from behind."

Tokyo is expanding its international espionage work after the deaths of five Japanese citizens at the hands of Islamic militants this year. The recent Paris attacks have also raised fears ahead of a Group of Seven summit in Japan next year and the Tokyo Olympic Games in 2020.


"Motonobu Abekawa, a former official at the Public Security Intelligence Agency and a terrorism studies expert at Nihon University said the new Counterterrorism Unit-Japan includes staff from the foreign and defence ministries, the National Police Agency and the Cabinet Intelligence and Research Office, Japan's version of the CIA. Initially made up of four leaders and 20 Tokyo-based experts focusing on Southeast Asia, South Asia, the Middle East, and north and western Africa, it eventually is to also include 20 intelligence officers assigned to overseas posts, possibly in Amman, Cairo, Jakarta and New Delhi." 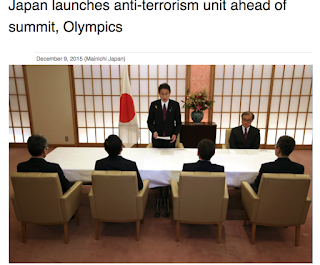 Japan has no institute to train intelligence agents, so they will have to learn on the job. In its annual security report published Monday, the National Police Agency stressed the need to raise alert levels for next year's G-7 summit in western Japan because it could be "a perfect target" amid escalating extremist attacks in Europe and the Middle East. Japan plans to obtain passenger information from airlines, install body scanners at major airports and step up identification of foreign visitors at hotels. A new police unit will search for Internet content related to extremist groups.

Some experts raised caution over the security measures, saying they could help the government exercise undue power over citizens and interfere with their freedom of information. "There is a risk that the terrorist attacks in Europe will be used as an excuse by Japan's authoritarian lawmakers and police bureaucrats to expand their powers," said Jiro Yamaguchi, a political science professor at Hosei University. In an article he wrote in The Japan Times, he cited a 2010 leak of internal police documents showing false accusations against Muslim residents in Japan treated as terrorism suspects. EoQ.

Posted by Unknown at 8:50 AM
Email ThisBlogThis!Share to TwitterShare to FacebookShare to Pinterest