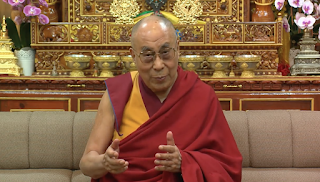 Dalai-Lama: “A strong action on climate change is a human responsibility”

I am very touched to see a small delegation of Tibetans joining the COP 21 in Paris. "Tibet Third Pole team making Tibet climate crisis heard in Paris" http://bit.ly/1Ix1Xxd For years the Dalai-Lama urged nations to do something against Tibet excessive mining, deforestation and river diversion and recently again the Dalai-Lama asked for "strong global action to limit global warming and to protect fragile environments, including the Himalayan glaciers and Tibetan" plateau http://bit.ly/1hQ55ro 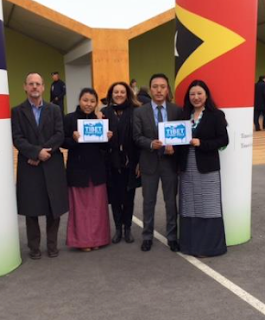 Impressive crowds in Tibet Lhasa are seen on these photos: "Butter lamps are seen at the Jokhang Temple Lhasa, on the Butter Lamp Day, a festival to commemorates Tsong Khapa, a master of Tibetan Buddhism Dec. 5, 2015" Xinhua China news reported. 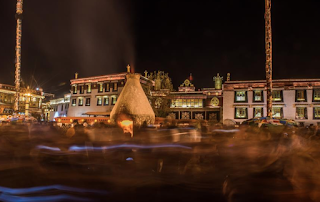 Chinese media choose their words cautiously such as using the word "tradition" and not religion or faith but at least they talk about Tibetan rituals. "Tibetan pilgrims adhere to the tradition to light butter lamps and pray for a good fortune on the annual Buddhist event."
http://bit.ly/1NBAgiJ

Watching the Potala and Jokhang images in December, I feel like needles in my heart. It was that very same place where I reported in Tibet and during Tibetans unrests, at the end of the 80's. Tibetans and monks demonstrations started in autumn 1987. Especially September, October and November 1987. 2 years of tension ended savagely in March 1989. I remember the Tibetans who took to the streets in Lhasa and elsewhere as the anniversary of the "1959 Uprising" approached. A martial law was imposed. I was in Lhasa just before.

I could walk everywhere I wanted, alone, without being followed too obviously, say. Most fascinating certainly, I managed to enter and stay inside the Potala. I spent time with the monks in the 1000 rooms, 10 000 shrines and 200 000 statues, and it was not always easy to access some chapels, I had to climb red painted ladders. Walking all alone among divinities only encouraged by dozens of Monks staying at each shrine. In a place where not a foreign person even not a Tibetan could enter was extraordinary. Beijing had just opened the access to Tibet in 1985. Few tried the journey. Less tried to enter when riots started. A rare moment of intensity that certainly impressed my life for years. In the middle of rampant violence, from Chinese and Tibetans, I was there, high on the top of the red mountain, talking with monks about Tibet, Tibetans, Buddhism, war, watching the valley from the terrace of the private apartments of the Dalai-Lama. I also met some high ranking priests. Things were then said, at low voice not to be heard from spies within Potala. It opened my eyes on matters of  life and eventually on international politics. Things are not what they seem, naturally.

Later on I told the Dalai Lama how I could stay in his apartment. He acknowledged the effort with sympathy and with some embarrassment too. Or was he just a bit emotional when I described where he received his people in his private appartement facing the amazing view of the Lhasa valley through thin yellow curtains flying in the cool wind of winter? 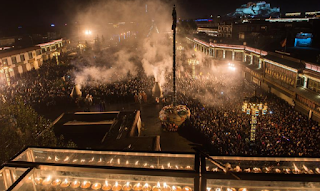 I talked to many different people while I was in Tibet. I never really understood how I could stay free as a bird, first of all buying a CAAC plane ticket Beijing Chengdu and Chengdu Lhasa, allowed to sleep at Chengdu airport and then free to embark for Gonggar Lhasa airport and then walking entirely free during days of reporting in Lhasa and monasteries around Lhasa. There, I saw Chinese military and police everywhere, they paraded, unarmed, every afternoon at 3 pm in front of the Jokhang precisely. I could sense tension both side, mostly racial prejudice, reciprocal between Chinese Hans and Tibetans. I witnessed a lot during biking several dozens of kilometres every day, at an altitude of 3600 meters. At night I could meet Chinese and Tibetans. I remember a terrifying full moon festival. Murder behind the Barkhor bazaar streets...There was no car available except military trucks and police jeeps. I often saw military cars fell into the low side of the road when I was going to Sera monastery where one monk has been killed by police. 2 months before Lhasa demonstrators had stoned the police offices in front of the Jokhang. Confusing youth, active militants, spooks? Who were these people working in the hotels who had packets and letters to be brought outside Tibet and posted not from Lhasa but from abroad...?

A few weeks after my reporting, I went to Thai-Cambodia jungles to report about sinister Khmers Rouges and then returned to Paris early spring and broadcasted my exclusive reports on France Info and RFI. I had met Chinese diplomats in Paris and we talked. I guess my balanced reporting allowed to meet both sides concerned and to voice my stories to the world audience without being hurt, attacked or threatened at that time.

One thing amazed me during my stay in China "opening and modernisation" policy under Deng Xiaoping ruling was the enormous energy developed by all to open their doors to the foreign world whom they trusted, until a certain point. Though I remember I was warned by people in Lhasa that it "would become difficult for me to stay longer" and that I had to think of leaving, while still safe. But who were these people and did they really fit the authorities opinion? Or were they simply zealous spooks, local bureaucrats? I had been told by one of my source in Lhassa that my hotel room has been visited and that they found my recording equipment and microphone, press card etc. They let me free. Some were arrested for simply taking photos of some areas near police offices.

Everything was made for me to enter and to leave peacefully Tibet with an infinite sympathy for the people I had to leave. At no time I have felt in danger. Although I knew that behind their religious fervour, Tibetans were actually opposing a strong sense of nationalism, struggling for their freedom, refusing to submit to the Chinese. On the other side the Chinese, sure to bring modernism to Tibetans and secure the streets, wished that Tibetans would devote in return a form of patriotism for China and appreciation for the modernisation of Tibet. Tibet seen from Beijing as an old feudalistic system. Extraordinary was to witness how a democratic Buddhism was actually the engine to a fervour political riot against China central government system. Chinese officials said that their system was most appropriate for the present time in Tibet.

Months passed. The Dalai Lama was awarded the Peace Nobel Prize in 1989. Then, arrests and repression with military tanks facing the Jokhang became daily scene in the streets of Lhasa prior to a  succession of new waves of modernisation of Lhasa by Chinese central government. Fight continues. Priests demonstrate, police arrest them, some for years in jail. Tibetan traditional homes disappear more and more. People self-immolated. A people is in danger to disappear. "Lhasa is being destroyed by excessive commercial development. Lhasa doesn’t exist for only tourists, there are real people who live here and it’s also a religious place" critics say. 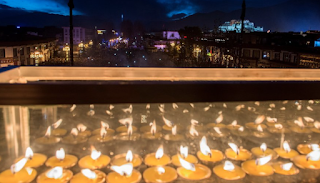 From the terrace of Jokhang Temple-Lhasa-Tibet

Posted by Unknown at 5:12 PM
Email ThisBlogThis!Share to TwitterShare to FacebookShare to Pinterest