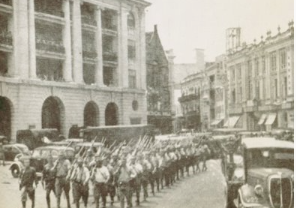 It is a show in Seoul and Tokyo but isn't only a communication trick pushed and followed very seriously by the US? But I can see the Uyoku 右翼団体 (Japanese right wingers) still angry and noisy, same as their South Koreans counterparts disagreeing on this "deal". The battle won't stop, as I said on Twitter there is nothing about the legal aspect, it's just an other apology with a reasonable amount of money in the package. State money. Yes. Again. ("There has long been resistance in South Korea to past Japanese apologies because many here wanted Japan to acknowledge that it has a legal responsibility for the women. Japan had long argued that the issue was settled by a 1965 treaty that restored diplomatic ties and was accompanied by more than $800 million in economic aid and loans from Tokyo to Seoul. JP Today http://bit.ly/1ZwNYvZ) The responsibility of why, who and how this crime could happen and is again settled by government with cash. "Both sides have agreed to refrain from criticising each other on this issue in the international community" Exactly similar to the post war deal of 1965 . Koreans are sceptical and did not agree to remove the statue symbolising the comfort women built in 2011 outside the Japanese embassy in Seoul. Seoul and Tokyo will nevertheless be able to use the deal for their flocks and interpret the deal the way they want. What about historical judgement and legal follow up? What about the new teaching on comfort women in text books? 46 former "comfort women" are still alive in South Korea.

Japan will now have to face the scrutiny of other comfort women elsewhere, in China for example. And in the rest of Asia, and... what about ex Indochina countries? Vietnam, Laos Cambodia and France during the 1941-1945 period? Not sure the US will be there to help if Japan and its revisionists continues on the mode of "we saved Asia from the white colonialists". By the way, why havent't the Japanese de-colonized the Asian countries in the early 1940's? Here we are and remain in a situation of a total hysteria spread by Japanese revisionists. The current prime minister Abe Shinzo has not whitewashed all ambiguities on this historical myth!
Posted by Unknown at 9:21 AM
Email ThisBlogThis!Share to TwitterShare to FacebookShare to Pinterest