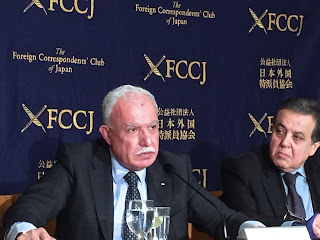 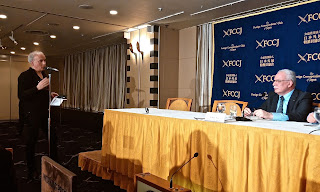 Palestinian foreign minister Riad Al Malki on Monday February 15, 2016 at the press club in Tokyo said Palestinians born under the ongoing Israeli occupation of the West Bank, which began in 1967, have seen nothing “but humiliation, soldiers’ check-points, deaths and killing”. "We will never go back and sit again in a direct Israeli-Palestinian negotiations." Malki emphasised that a multilateral framework to solve the Israeli-Palestinian conflict is needed and he praised an initiative discussed late last month by France to revive plans for an international conference to end the conflict.

But when I asked to Riad Al Malki about the risk of violence should no agreement be reached at the UNSC, Malki warned that without international involvement a vacuum will be left that may end up being filled by the Islamic State jihadist group. "If Daesh take advantage of lack of any brokers... then of course, they might come and try to fill it," he said, referring to Islamic State.

"If the Americans are giving up and the Europeans don't have the courage to do anything and Arabs are really worried about their own problems, what do you expect? Extremists around might take over."

Five Palestinians, including three teenagers, were killed while carrying out attacks Sunday, the latest in a wave of Palestinian knife, gun and car assaults on Israelis

During a meeting between Palestinian president Mahmud Abbas and Japan prime minister Shinzo Abe, Abe pledged $78 million in fresh economic assistance, according to Jiji Press and Kyodo News. Abe also "expressed Japan's intention to continue its political and economic support so that Palestine will be an independent, democratic, viable and contiguous state," Kyodo said.

Comment from one foreign journalist from the Arabic world: "It's all a matter of power competition“ Hamas, Israel and the U.S.