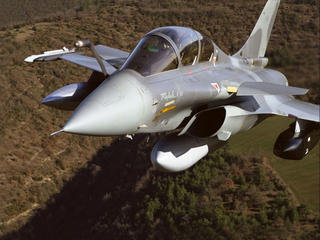 "A multi-role strike fighter Rafale M jet performed
landings, and an E-2C Hawkeye from the French aircraft
carrier Charles De Gaulle trapped and launched from
Ike's deck during MNME 05-1. It is the first time in
more than four years Ike has worked with multinational
forces.

MNME 05-1, which incorporates more than 17,000 Sailors
from Canada, France, Great Britain, Spain and the United
States, is one step in the certification of forces for
the NATO Response Force (NRF).

For Ike to be a participant in such a multinational
exercise is historic, in the sense that the warship has
only been to sea five times since completing her
four-year, mid-life overhaul. Not since 2001, when Ike
last completed a Mediterranean cruise, has the
nuclear-powered aircraft carrier taken on an active role
with NATO forces.

Ike's role in MNME 05-1 was to provide a platform for
allied navies to use as the United States and other
countries continue to build relationships, which are
vital to the overall success of any military operation.
In addition to fixed wing operations, French Puma and
Dauphin helicopters also landed aboard Ike.

Ike also hosted 15 French sailors for a 24-hour period.
The French Sailors were able to tour most of the ship,
including the gyms, ship?s stores, various work centers,
the bridge, primary flight control and the flight deck
during flight operations.

"I was very impressed because there was so much
activity," said Petty Officer Sebastien Laurent of
Charles De Gaulle from NORMANDY, France. "There is
always aircraft flying, landing and launching ? it never
stops."

Laurent said he and his French shipmates were amazed at
the complexity of Ike, since De Gaulle is not as
compartmentalized as U.S. aircraft carriers. De Gaulle
has two catapults and holds 40 aircraft, so the French
Sailors were amazed at Ike?s size.

Lt. Cmdr. Jason Rimmer was one of three Ike crew
members, in addition to eight Carrier Air Wing 7
representatives, who flew over to De Gaulle to
experience how their French ally conducts carrier
operations, and to offer assistance regarding the
launching and recovery of several U.S. Navy aircraft,
including an F/A-18 Hornet, E-2C Hawkeye and C-2
Greyhound.

This was the first time an F/A-18 landed aboard De
Gaulle.

"I thoroughly enjoyed my trip to the Charles De Gaulle
and the chance to participate in joint operations with
the two navies," said Rimmer. "Their commanding officer
put it best, saying that he hoped this exercise would
prove our interoperability and readiness for tasking
wherever and whenever. The French were excellent hosts
and extremely professional operators."

As Ike continues to move forward toward becoming surge
ready under the Fleet Response Plan, the Nimitz-class
aircraft carrier will take on a more active role in
exercises such as MNME 05-1."
Posted by Unknown at 12:59 PM
Email ThisBlogThis!Share to TwitterShare to FacebookShare to Pinterest