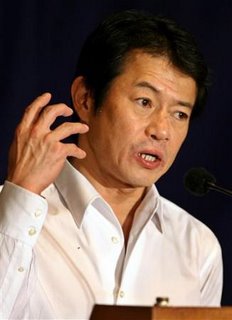 Japan's Agriculture Minister Shoichi Nakagawa spoke to
the press at the Foreign Correspondents' Club of Japan
during his press conference in Tokyo Friday, June 23,
2006. Cabinet Minister Nakagawa, Tokyo University
graduated and long time veteran politicians elected in
Hokkaido, called a U.S. proposal to impose sanctions on
Tokyo if it doesn't resume imports of American beef soon
"nonsense." "The fact that the senators have chosen this
moment to submit the bill I think is nonsense,"
Agriculture Minister Shoichi Nakagawa said. He added
that safety procedures must be properly examined, saying
"haste makes waste." The U.S. Senate is considering
legislation that contains a nonbinding call for trade
sanctions unless the imports are restarted by the end of
the summer. 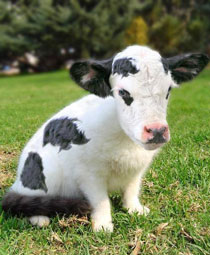 Japan says it wants to ensure the facilities measure up
to Japanese food-safety guidelines amid fears of mad cow
disease, but some U.S. lawmakers accuse Japan of another
stall tactic after months of negotiations. Japan plans
to send three inspection teams the United States on
Saturday, but Health Ministry official Kenichi Watanabe
would not say what meat-processing facilities would be
their first stops. Each team will consist of three
officials from either the health and agriculture
ministries. The ban, first imposed in 2003 over concerns
that U.S. beef might be infected with mad cow disease,
was lifted at the end of last year. But in January,
Japan again halted imports of American beef after one
shipment was found to contain prohibited parts of cows
believed at risk of the disease.

At stake is a trading relationship that was worth $1.4
billion annually to the U.S. beef industry when Japan
banned American beef in response to the first U.S. case
of mad cow disease in 2003. Nakagawa said he and his
U.S. counterpart, U.S. Agriculture Secretary Mike
Johanns, "both realize there are still issues that must
be addressed" in the inspections. The one-month audit
will tour 35 meat-packing plants to ensure the facilities
comply with Japanese import regulations. Inspectors will
also review procedures at ranches, feedlots and mills. 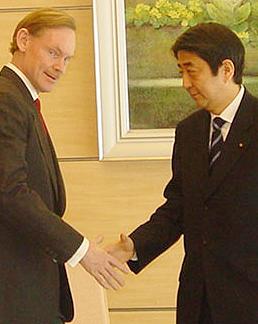 A study of an epidemic caused by cannibalism indicates
the human form of mad-cow disease may incubate for more
than 50 years before developing into the fatal illness,
researchers said in a medical journal.

The findings suggest the eventual size of a variant
Creutzfeldt-Jacob disease epidemic may be much bigger
than previously thought, U.K. researchers including John
Collinge of the University College London wrote in this
week's The Lancet.

Bovine Spongiform Encephalopathy, or mad-cow disease, was
first found in the U.K. in 1986. Humans catch the
disease through meat from cattle that have eaten feed
mixed with ground-up parts of infected animals. About
160 U.K. residents have been diagnosed with the disease,
with cases also reported in the U.S. and Japan. 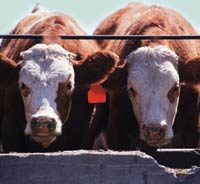 "A human BSE epidemic may be multiphasic,'" Collinge
said in The Lancet. "Recent estimates of the size of
the variant Creutzfeldt-Jacob disease epidemic based on
uniform genetic susceptibility could be substantial
underestimations."

The disease is caused by abnormal prions, a type of
protein that damages the patient's central nervous
system. The prions unfold in the brain, creating vast
dead spots.

The researchers studied kuru, a disease caused by
cannibalism that reached epidemic proportions in some
areas of Papua New Guinea. The cannibalism, which was a
ritual mourning practice, was stopped by Australian
authorities in the 1950s. The researchers identified 11
patients with kuru and found that estimated incubations
periods were as long as 56 years and may have been seven
years longer.

The incubation period for BSE prions in humans may be
even longer because infection between species typically
takes longer than within species, the researchers wrote.
The patients identified so far may "represent a distinct
genetic subpopulation with unusually short incubations
periods for BSE," Collinge said. 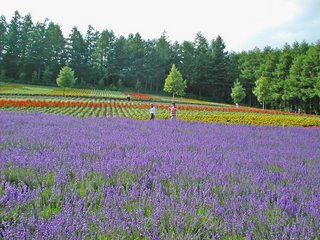 A scenery of the Hokkaido landscape, region of Japan
known for its agriculture and its environmental
protection.
Posted by Unknown at 8:09 AM
Email ThisBlogThis!Share to TwitterShare to FacebookShare to Pinterest