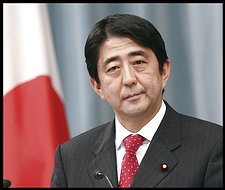 Japan has the right to strike a foreign missile base if
the country is under imminent threat of attack, Chief
Cabinet Secretary Shinzo Abe said Monday. Speaking to
reporters and referring to the pacifist Constitution, Abe
said overseas strikes would fall within the legal
parameters of self-defense "if there is no other way to
prevent a missile attack on Japan."

Abe, however, appeared to be discussing a theoretical
possibility rather than a realistic response to the launch
of ballistic missiles by North Korea into the Sea of Japan
last week. In making the remark, Abe referred to an
official government view on overseas attacks expressed in
1956 by the then Defense Agency chief during a Lower House
session. "We have to have deeper debate on the issue" of
the Constitution's ban on the use of force to settle
international disputes, and its limits on Japan having
only self-defense capability, Abe added. Later, Prime
Minister Junichiro Koizumi told reporters: "We have to
think carefully about whether we can really resort to arms
before we are attacked because this is also a
constitutional issue." 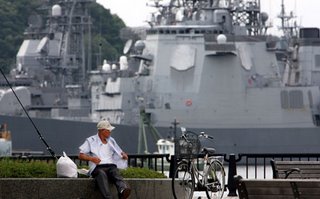 Abe's statements mirrored remarks Sunday by Defense Agency
chief Fukushiro Nukaga. "As a sovereign nation, it is
natural to consider possessing the minimum capability (for
pre-emptive strikes) under a certain framework," Nukaga
said, adding that the ruling Liberal Democratic Party and
its coalition partner, New Komeito, need to agree on this.
Nukaga also said on a TV program that Japan should have
the option of launching an overseas strike if it is clear
an enemy is poised to attack. North Korea test-fired
seven ballistic missiles Wednesday, including a
Taepodong-2, a model that is believed to have a design
range that puts the U.S. mainland within its reach.

In January 2003, then Defense Agency Director General
Shigeru Ishiba stirred controversy with comments about a
pre-emptive strike on North Korea, saying Japan can ask
the U.S. to attack the North's missile bases if Pyongyang
appears bent on an attack on Japan and is preparing for
such hostility. As for Tokyo's tough stance against North
Korea's missile tests, Abe also said Monday there is no
surprise that Japan is on the alert. "We are of the
belief that North Korea's missile launches pose a positive
threat to Japan and the surrounding areas," he said. (JT
& agencies) 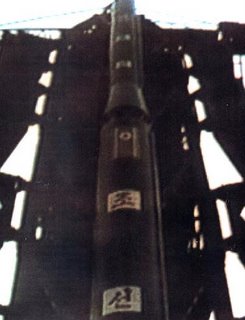 Posted by Unknown at 9:27 AM
Email ThisBlogThis!Share to TwitterShare to FacebookShare to Pinterest