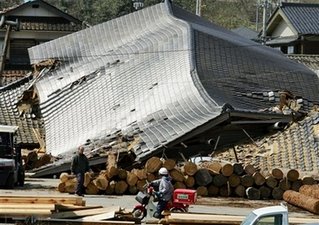 Hardest hit is Ishikawa prefecture on the Honshu
central island of Japan, the quake early Sunday killed
one person and injured 193 others. Powerful
aftershocks have struck the western coast of central
Japan, a day after. Some of the aftershocks measured
as much as 5.3 in magnitude and similar shocks were
also felt in Vanuatu, which was also hit by
earthquakes on Sunday. While the Pacific island
suffered no damage, in Japan some buildings were
affected, and water mains broken. The Japanese
government has pledged to help those affected by the
quake.

Japan is located on the "Ring of Fire", an arc of
volcanoes and oceanic trenches which partly encircles
the Pacific Basin. The Archipelago accounts for about
20 percent of the world's earthquakes of magnitude 6
or greater. A tremor occurs in Japan at least every
five minutes, and each year there are up to 2000
quakes that can be felt by people.

The Great Kanto earthquake of September 1, 1923, which
had a magnitude of 7.9, killed more than 140,000
people in the Tokyo area. Seismologists have said
another such quake could strike the city at any time.

On January 16, 1995, an earthquake with a magnitude of
7.3 hit central Japan, devastating the western port
city of Kobe. The worst earthquake to hit Japan in 50
years killed more than 10.000 on the spot and months
after, and caused an estimated $100 billion in damage.

The Tokyo metropolitan government said in March 2006
that a magnitude 7.3 earthquake under Tokyo would
probably kill more than 5600 people and injure almost
160,000. Official estimates of economic damage have
topped more than $1 trillion. Other reports panned
that a tremor would kill hundreds of thousands of
people, cause damage running into trillions of dollars
and have global economic repercussions. Each day is a
reminder of the risk for Tokyo-Yokohama metropolis,
with a population of 35 million. It has the highest
"at risk" rating from natural disasters such as
earthquakes of any of the world's 30 "megacities". 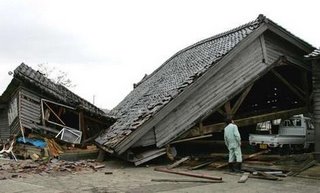 Posted by Unknown at 10:51 PM
Email ThisBlogThis!Share to TwitterShare to FacebookShare to Pinterest