Hillary to North Korea: 'We are watching you very closely' 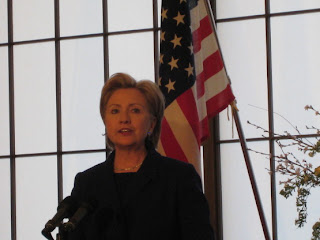 The visiting US Secretary of State Hillary Rodham Clinton warned North Korea not to conduct a missile launch, saying that it "would be very unhelpful" to any opportunity to improve relations with the United States. At a news conference at IIkura House in Tokyo, Hillary Clinton said North Korea's actions will determine whether the Obama administration reaches out in turn.

"If North Korea abides by the obligations it has already entered into and verifiably and completely eliminates its nuclear program, then there will be a reciprocal response, certainly from the United States," Clinton said. "But the decision as to whether North Korea will cooperate , end provocative language and actions, is up to them and we are watching very closely."

In front of the reporters and foreign correspondents, Secretary Clinton and Japan Chief of diplomacy Nakasone signed an agreement, negotiated by the Bush administration, which will move 8,000 of the 50,000 U.S. troops stationed in Japan to Guam, a transfer Japan is largely paying thanks to tax payers money. The price of tranquility.

Clinton participated tuesday early morning in another welcoming ceremony and a purification rite at a Shinto shrine to former Emperor Meiji. She was given tea and exchanged gifts with the main priests, telling them that she appreciated the message of "harmony and peace that this shrine represents." "It's a good concept for America's role in the world. We need to be looking to create more balance, more harmony."
Posted by Unknown at 4:54 PM
Email ThisBlogThis!Share to TwitterShare to FacebookShare to Pinterest