Increasing requests of the US on Japan to involve more money and people in the war in Afghanistan could meet obstacles as the situation where Japan is today is obviously clear: 'We have other problems at stake' as one source said recently. 'Today it is with Guam, then Afghanistan, tomorrow with the cost sharing of Japan Us Alliance, the day after we'll have to bear the cost of the F-35. When will it end'? In this regard the meeting between US Secretary Clinton and DPJ President Ozawa Ichiro was quite fascinating.

Think: a major player of the Obama administration is sent to Asia, stops first in Japan Tokyo, and takes time to meet, after much difficulties, the leader of the Japanese opposition of the 'Minshuto', Mr. Ozawa Ichiro, seen as the possible alternative to the LDP rule. Subjects mentioned had included economics, climate change, North Korea's nuclear program, Afghanistan. Next week, Japanese Prime Minister Taro Aso is to become the first foreign leader to visit the new president Obama at the White House. One point is still unclear: Things are not easy about the Afghanistan "war". The perception of a Western Silk Road policy can collide with Japan and China own interests. 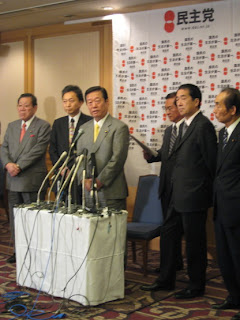 "The culture of bearing arms in Afghanistan is related to the country's history and geographic location. Afghanistan was strategically situated along the so-called Silk Road, which linked Asia to Europe and had been constantly attacked over the centuries. “The history of conflict, combined with weak governments and strong local loyalties, has led to a culture where guns are perceived to be as necessary as a cooking pot or a mule.”

Quotes 2: Glocom "... the main objectives of the "Central Asia plus Japan dialogue" is the promise of "cooperation between Japan and Central Asia with respect to both regional issues and issues having international dimensions." Japanese Prime Minister Aso Taro echoed this sentiment in a speech he gave as foreign minister in June 2006 to colleagues from the five Central Asian nations: "Japan would like to improve access to transport for both goods and people, and in so doing enable the people of Central Asia to have a broader view of the world..." In the same speech, Aso spoke of the need to construct a road linking Central Asia to the sea via Afghanistan and Pakistan. Tokyo hopes to eventually see the construction of energy pipelines linking Central Asia to the Indian Ocean. Aso also pointed out that Japan accounts for 30 percent of the development assistance that goes into Central Asia by countries that are OECD members."

"Japan's desire to link Central Asia and Afghanistan was in evidence in November 2005 when Afghanistan was admitted into the Central Asia Regional Economic Cooperation (C.A.R.E.C.), a grouping organized by the Japan-led Asian Development Bank (ADB). Tokyo was instrumental in getting the five Central Asian nations membership in the ADB prior to the year 2000. Unlike the United States, Japan's image in the region is not generally politically associated. In a poll conducted by Tokyo University across Central Asia in late 2005, Japan ranked consistently high in popularity among the populace of the five countries, and was identified as a "peace-loving" and "non-threatening" nation by a large number of respondents. Japan also maintains very good relations with Azerbaijan and Georgia, the two trans-Caucasus nations that mark the beginning point of the overland supply route."

"By helping realize a 21st century Eurasian transport corridor (a modern version of the Silk Road), Japan can honor commitments to its ally Washington in the war on terror, and it can revitalize its Central Asian initiative. Regardless of whether the LDP stays in power, or whether the DPJ forms the next cabinet, a re-energized role in Central Asia – helping to fight the war on terror in Afghanistan – fits in well with the vision of policy-makers in both parties for an invigorated Japanese diplomatic strategy in the 21st century...." (Feb 2009 in Glocom by Joseph Ferguson)

Quotes 3: "The quest for long-term energy supplies is becoming a matter of increasing regional competition with secure access to oil and gas a matter of national strategic consideration. On the issue of energy and cooperation in Northeast Asia and Central Asia, political entities in Northeast Asia, namely China, Japan, North and South Korea and Taiwan are acting to secure long-term energy supplies. Russia and the Central Asian states, on the other hand, have a significant proportion of the world's primary energy resources and want to increase such exports." (Central Asia-Caucasus Institute and Silk Road Studies Program) Samarkand and Silk Road
Posted by Unknown at 1:46 PM
Email ThisBlogThis!Share to TwitterShare to FacebookShare to Pinterest