A rare opportunity to approach the DPRK leaders was offered to a small group of western correspondents in Japan for a "diplomatic cocktail" related to the celebration of the Pyongyang leader Kim Jong-Il anniversary. February 16th the North celebrates the 67th birthday of the “dear Leader”.

Kim Jong-Il, the "Dear Leader" was born 16 February 1941 in Vyatskoye, Soviet Union, although the Pyongyang liturgy claims he was born a year later in Baekdu Mountain, on China Korea border. The party was placed under the authority of the Chief Vice Chairman of the (long tittle...) Central Standing Committee of the General Association of Korean Residents in Japan, Mr. Ho Jong-Man, and the Director of the International Affairs Bureau Mr So Chung-On. 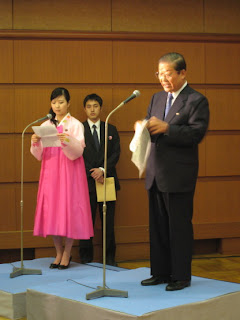 Mr Ho Jong-Man:
"Bush has gone, we hope that the new administration of President Obama will no longer refer to us as part of an "axis of evil"!

We arrived at the Tokyo headquarters of "Chosen Soren", a lot of police around the gigantic bunker-building had closed the roads. Many policemen, uniform and plain clothes, and secret service, monitored the area, most politely. Some having the face hidden by cotton mask (flu?).

The Japan headquarters of the residents' association in Tokyo serves as the "embassy" in Japan that has no diplomatic relations with the Northern country. Approaching the building I immediately recognized the same rigid and ceremonial protocol I am used to see when I am in Beijing. And when passing through the gates of the building tainted with an oriental elegance I noticed obviously that the Korean people there were interested to see their headquarter visited by some foreign journalists. To my surprise, I was treated with great care in spite of coming from France, being a foreign correspondent of a country that does not recognize DPRK diplomatically.

After greetings and exchange of name cards, we climbed the stairs to enter into a room with a dozen officials on a line, welcoming guests. After greeeting each of them with a : "Pulanso saram or Furansu Hoso" I entered into the party place filled with three hundred guests. Korean, Japanese, a few foreigners specialized as "Korea Watchers", a bunch of diplomats, some Japanese VIPs' and a few "talento" (some were Japanese TV personalities of Korean origins) raising their glass in front of an empty stage where 2 massive portraits of Kim Il-Sung and of Kim Jong-Il his son, were raised facing the flock. Special, very special.

Here was a chance of our access to an unknown world "not-contaminated" by our western culture and "sanitized" by Japanese authorities. Some guests, who obviously were not used to see foreign media in such "quarantined area", had a wet back and sweating face while we did our work, asking questions and comments to the inviting party. Lots of beer and food, sushis, catered by Chinzan-so, lots of cheers in front of glasses emptied as soon as they were filled. 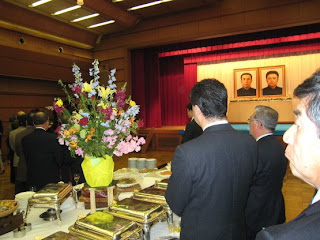 Not a word or question was refused even if the comments were rather ""dogmatic"". The party went on. Atmosphere was more relaxed after a few drinks, statements and jokes. Naturally, I heard the full course of Pyongyang statements that contradict all what can be heard from times to times in Tokyo or Seoul: "There were 17 or 18 abductees" in North Korea an Kim Jong-Il apologized to Prime Minister Junchiro Koizumi. "Our Korean schools in Japan are discriminated by Tokyo Governor Ishihara's policy. We are waiting for the Obama administration to set an envoy to talk with DPRK." 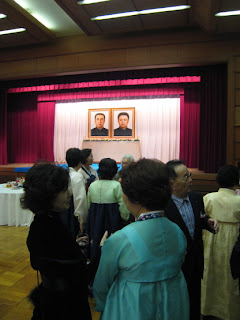 "DPRK will launch a satellite"

I focused on the news that Pyongyang prepares to launch a missile able to carry nuclear warheads. The test could take place on February 25th the first anniversary of the mandate of South Korean President Lee Myung-Bak. The Taepodong-2 missile is 36 meters tall and can contain up to 500 kg of nuclear warheads.

According to my North Korean source at the party, the Pyongyang's rocket is to launch "a satellite", not a missile! An other NK source told our little group of Japan based foreign correspondents that the "South and the US continue their containment" and that "Pyongyang intentions are to open for economic exchanges."

An hour passed, time to leave after this "special" permission to attend this "dear leader"'s anniversary event, which looked like any other celebration event in any capital city. While I left the place, I noticed a refine etiquette and kindness to the foreign media. The last image I kept from this amazing event is the team of two North Korean cameramen using a very old and very noisy movie camera that certainly filmed the Korean war... When I asked if it could be possible to go to report to Pyongyang, Mr So did not refrain to state that "it is a bit difficult but not impossible".

An interesting captive market I told to myself!

The North will celebrate its “Dear Leader” Kim Jong-il's 67th birthday on Monday, who seems to have made a full recovery from the stroke he suffered in August. Next week, Secretary of State Hillary Clinton will make her first overseas trip: the head of US diplomacy will visit Asia and the North’s nuclear agenda will likely take top priority in talks.
Posted by Unknown at 11:50 AM
Email ThisBlogThis!Share to TwitterShare to FacebookShare to Pinterest